In a car accident airbags inflate on time scale of few milliseconds to slow down passengers in a comparably gentle manner before they hit the hard structure of the car or they prevent the impact altogether. Liquid drops impacting onto a solid surface, like rain drops hitting ground and inkjet drops hitting a print medium, experience a similar air-cushion effect that guarantees a soft landing, as Jolet de Ruiter and coworkers from Twente University report in the Physical Review Letters.1

In contrast to the artificial airbag in cars, in the experiments of de Ruiter et al. it is the naturally present ambient air that slows down the drops to a small fraction of their initial impact speed of order m/s before they actually touch ground. Using a novel high speed optical interference technique they follow the evolution of the air layer entrapped between the drop and the substrate. The drop spreads on top of this air cushion and assumes a complex dimple shape until – after a few milliseconds – the air layer collapses and direct solid-liquid contact is established. The experiments confirm salient aspects of a recent model that describes the impact process by a balance of inertial forces in the drop and viscous forces in the thin air layer. Only the minimum thickness of the air layer just before collapse is found to be mysteriously large (>200nm), which points to the relevance of rarefied gas effects at such small scales. For the “deflation of the airbag”, i.e. for the spreading of the solid-liquid contact, surface tension and the viscosity of the liquid enter the picture. To demonstrate the relevance of their present observations for a broader range of applications, de Ruiter et al. now evaluate the influence of air cushions for the impact of drops on rough surfaces. 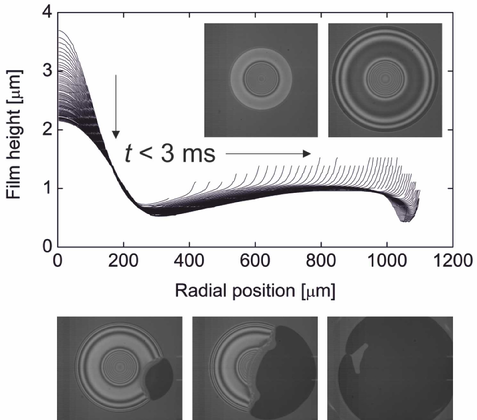