When a colloidal particle approaches a wall, its hydrodynamic interaction with the wall causes the particle to slow down. This well-known result applies also to organized motions like sedimentation near a wall, but also to random motion (diffusion). While a lot of knowledge exists on the dynamics near a single flat wall, relatively little is known about the influence of multiple walls or a curved wall on diffusive dynamics. Yet in nature and technology, many examples can be found of confining walls that enclose particles, e.g. droplets or living cells. This phenomenon was studied in the PCF group by capturing a micron-sized particle inside a microscopic cylinder (defined inside a microfluidic device). Very precise measurements of the particle displacements relative to the cylinder walls (using confocal microscopy) allowed to measure components of the local diffusion tensor. It turned out that the 3D confinement is felt everywhere, but most strongly near one or two walls, where it can be up to 10 times lower compared to the middle and bulk.

More can be found in the Langmuir paper: “Anisotropic and hindered diffusion of colloidal particles in a closed cylinder” by H.B. Eral, J.M. Oh, D. van den Ende, F. Mugele and M.H.G. Duits. 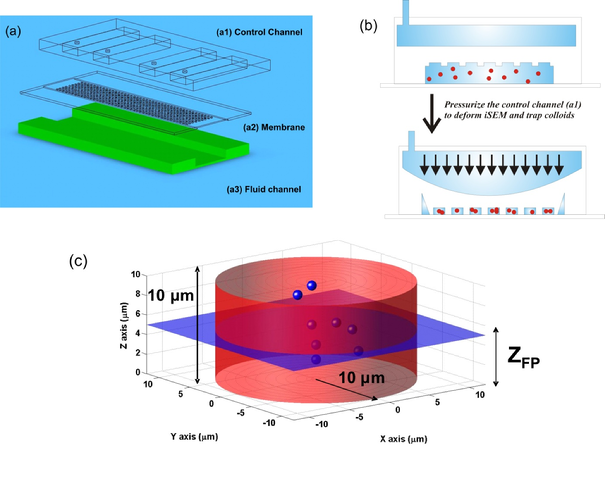