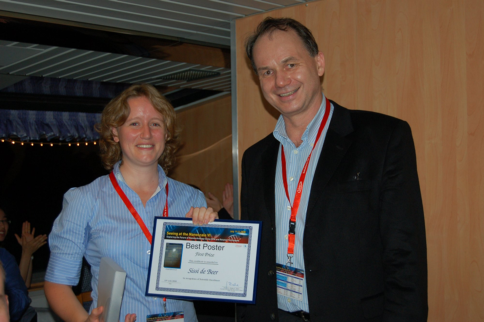 Sissi won the first prize for the best poster at Veeco’s Seeing at the Nanoscale VI meeting on 9-11 July 2008 in Berlin with her poster entitled ‘Dissipation in confined liquid films measured by small amplitude AFM spectroscopy’. In the poster she described her recent experiments on force spectroscopy using oscillatory Atomic Force Microscopy. The measurements show that liquid molecules confined between two solid surfaces at a separation of a few nanometers are arranged in layers. The data allow for a quantitative measurement of both conservative and dissipative part of the oscillatory forces. The prize consisted of special AFM cantilevers worth approximately 2000 EUR.