The molecular liquid structure measured at the solid liquid interface

In the first week of February we obtained the first high resolution AFM spectroscopy data of liquids close to a solid wall. We monitored amplitude and phase of an AFM cantilever driven with very small amplitude (A0<0.1nm) upon approaching the tip towards the surface. Both amplitude and phase signal display an oscillatory behavior reflecting the layered arrangement of molecules in the gap between tip and sample. From the measured behavior of amplitude and phase we will extract both conservative interaction forces as well as dissipative forces of nano-confined liquid films.

(The experiments were performed in collaboration with Abdelhamid Maali (CNRS Bordeaux) who visited Twente during the first week of February.) 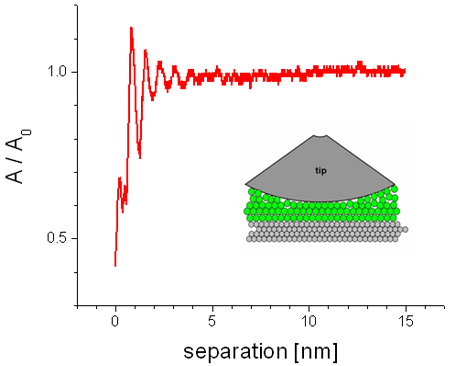 Figure 1 Amplitude of the AFM-cantilever versus separation between the solid (HOPG) surface and the cantilever-tip. The periodicity of the oscillations reflects the size of the molecules (Octamethyltetrasiloxane).