CLINICAL BACKGROUND
At present, monitoring and subsequent treatment strategies of patients with a vascular disease mostly rely on simple geometrical parameters, such as percentage stenosis and vessel diameter. However, local blood flow patterns have a major effect on the onset and progression of vascular diseases. For instance, in patients with an abdominal aortic aneurysm (AAA) the local dynamics of blood flow, is attributed to extracellular matrix degeneration, thereby weakening the aortic wall and increasing the risk of enlargement and subsequent rupture. Furthermore, post-treatment altered flow patterns are considered to be related to in-stent restenosis and thrombosis. Blood flow quantification is presently not included in risk assessments and therapy guidance for vascular disease. Thus, patient outcome and treatment can greatly benefit from non-invasive, real-time analysis of the local blood flow patterns.

PROJECT DETAILS
Thus far the feasibility of echoPIV has been investigated in patients treated with a stent in the superficial femoral artery (SFA). This study took place at the department of vascular surgery of the Rijnstate Hospital in Arnhem. In total twenty patients were included and HFR CEUS measurements were performed at three different locations, namely the common femoral artery and the inflow and outflow region of the stent in the SFA. Results show that it is feasible to quantify local flow patterns near and inside stents using echoPIV. Several issues that impede echoPIV, like microbubble destruction due to the ultrasound intensities and shadow artefacts due to vessel calcifications, were identified while evaluating the data. Fortunately, none of these issues were related to the stent material (paper describing these results in preparation). An example of blood flow in the femoral bifurcation measured with echoPIV is given in Figure 1.

Currently we are preparing the next clinical trial in which we would like to investigate the feasibility of echoPIV to quantify blood flow in the abdominal aorta of patients with an AAA. Measurements at different locations of interest around the aneurysm will be performed before and after endovascular repair. This way the influence of the stent-graft placement on the local hemodynamics can be evaluated. To validate the echoPIV results, a comparison with outcomes of 4D flow MRI examinations will be made. 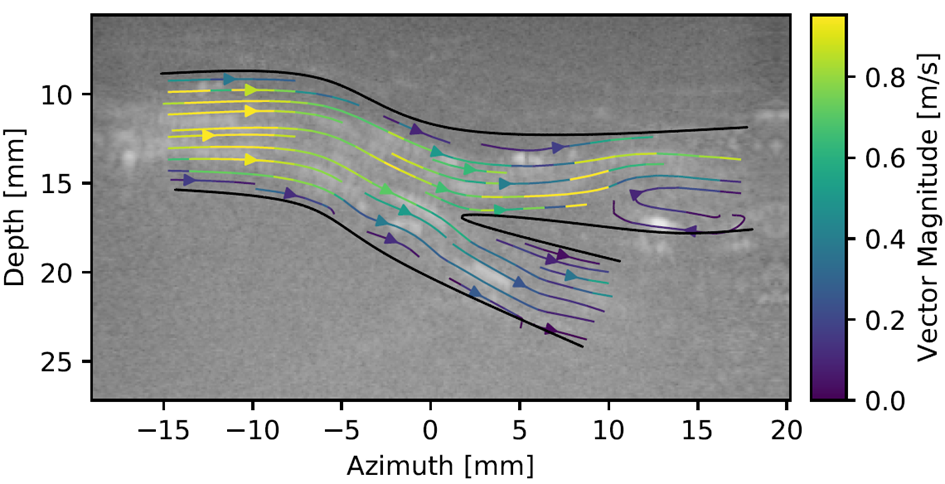 Figure 1. Contrast-enhanced ultrasound image of the femoral bifurcation with the velocity streamlines superimposed. Distal to the bifurcation, in the superficial femoral artery (SFA), a flow disturbances in the form of recirculation is visualized. CFA; common femoral artery, DFA; deep femoral artery.