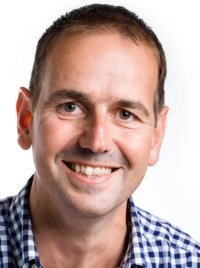 Chris L. de Korte is Full Professor Medical Ultrasound Techniques. He studied Electrical Engineering at the Eindhoven University of Technology. In 1999, he obtained his Ph.D. at the Biomedical Engineering Group of the Thoraxcentre, Erasmus University Rotterdam on his thesis Intravascular Ultrasound Elastography. In 2002 he joined the Clinical Physics Laboratory, Department of Pediatrics of the Radboud University Nijmegen Medical Center of which he became head in 2004. In 2006 he was registered as Medical Physicist. Since 2012, he is chair of the Medical UltraSound Imaging Centre at the Department of Medical Imaging: Radiology of Radboud university medical Centre. In 2016, he was appointed full professor Medical Ultrasound Imaging at the University of Twente.

His research is on functional imaging using Ultrasound with a focus on cardiovascular and oncological applications. For his research he received multiple grants from the Dutch Technology Foundation (STW) and a VENI (2000), VIDI (2006) and VICI (2011) grant from The Netherlands Organization for Scientific Research (NWO). In 2018, a consortium under his leadership was awarded the NWO-TTW Perspective grant (4 MEuros). In the last decade, he has been awarded grants resembling more than 10Meuros. He published more than 180 peer-reviewed publications in international journals, gave more than 50 invited and 5 key-mote lectures and international conferences, and acted as reviewer and panel member of national and international granting organizations.