Material science has come to the nano-scale where material properties are dictated by specific atomic structuring and/or combination of materials.

To control the material property one has to control of the growth of material on nano-scale.

With Pulsed Laser Deposition It is possible to create a whole new class of materials, tailor-made to applications. Such materials are also ideal for the purpose of understanding the physics and the search for materials with even yet not-known properties.

PbZr(x)Ti(1-x)O3 is a well known ferro-electric material which is used in many industrial piezo-electric applications. PZT is a perovskite which can have, depending on Temperature and Zr/Ti ratio, different structure phases. The piezo-electrical effect varies in the phase diagram and is at his maximum at the morphotropic phase. Theory and practice have shown that the strong piezoelectric effect is a result of the freedom of polar rotation in the disordered (monoclinic) phase. Because of the ‘thin line’ of the desired phase it is very difficult to produce this monoclinic phase in a pure and controlled way. Artificially induced c-axis disorder of PZT may stimulate a higher piezo-electric effect.

The artificially induced c-axis disorder can be build by pulsed laser deposition. Herefore growth of the material has to be controlled on mono-layer scale, and one has to manage the volatile Pb during the ablation process.

The figure below shows the differences in measurements when using a metal electrode or a SrRuO3 electrode on the same ferroelectric material. 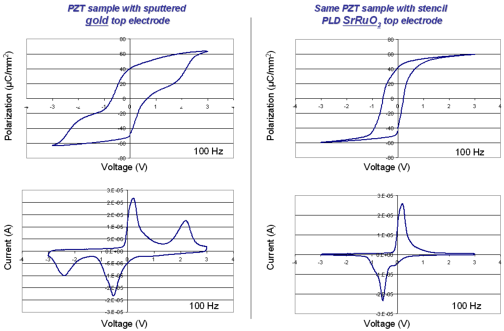 Figure 1. Differences in polarization measurements when using a metal electrode or a SrRuO3 electrode on the same ferroelectric PZT material.

In 2005 research was expanded to understand the ferroelectric property and domain forming. Different thin films PTO were grown on different substrates with pulsed laser deposition. The substrates gave different stress and strain levels to film and the spontaneous polarization was researched by synchrotron radiation at DESY in Hambug. Good control of the growth of PTO on these substrates was necessary to make these films. Research of the growth and nucleation of PTO gave insight in new growth behaviour. This research was set-up in collaboration with the group of Beatriz Noheda who did have the expertise and the possibilities to analyse the films at the synchrotron of DESY in Hamburg. The results of these analyses will be published in 3 or 4 joined articles of which one is written in 2006 and submitted: 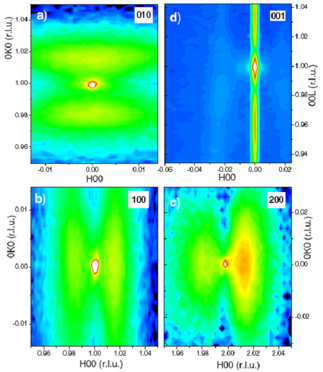 This research is performed by: Arjen Janssens