Attraction to SAM (Self Assembled Monolayer) area have increased over last 25 years although the studies started much earlier. Alkanethiol/gold systems which yield ordered, densely packed and stable SAMs are the mostly studied ones.

SAMs may be defined as ordered molecular assemblies formed spontaneously by the adsorption of a surfactant with a specific affinity of its headgroup to a substrate [1]. The driving force for organization is the lowering of the interfacial free energy [2]. 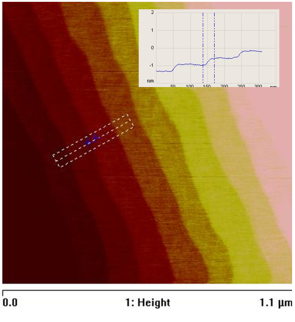 Metal oxides with different surface structures have been used as substrates for formation of SAMs of organic films usually by immersing the substrates into the solutions of organic molecule. Several studies reported highly oriented, densely packed SAMs of carboxylic acids, alkyl/alkenephosphates, phosphonic acids on TiO2, Al2O3, Ta2O5, ZrO2 etc. In most of the previous studies the conformational match between the sizes of the headgroup (of organic molecule) and surface atomic arrangement was not usually discussed. When the geometries of the surfaces and sizes of headgroups seem considered, alkylphosphates seem to form ordered SAMs on Ta2O5 or R(1-102) surface of Al2O3

The aim of the project is to develop new functional materials through nanofabrication of organic/inorganic hybrid interfaces. We will investigate monomolecular organic layers (SAMs) that form spontaneously by chemisorption of surface active organic molecules (phosphates, silanes, others) to inorganic surfaces such as TiO2, Al2O3, Nb2O5, SrTiO3, LaAlO3 as well as other (mixed) metal oxides, and investigate the conformational match between the headgroups of organic molecule and substrate lattice.

The project is performed by collaboration of IMS and SMCT groups within the Nanofabrication area of MESA+.