During the last couple of years, synthetic procedures for the production of electrochemically synthesized nanowires have been developed in the Inorganic Materials Science lab. Via this very cheap and simple method, billions of free-standing metal (Au, Ni, Ag, Sn, Pt) and metal oxide (ZnO, Ag7NO11) nanowires with a diameter of 50-300 nm and a length of 4-6 µm can be synthesized inside the pores of PCTE and AAO membranes; see Figure 1 for a SEM image of a cluster of nickel nanowires.

Figure 1: A cluster of nickel nanowires

This templated electrodeposition technique for the production of nanowires and nanotubes could also be used for the synthesis of larger line patterns by using a PDMS mold pressed on a silicon substrate as the template instead of membrane pores.

During the next step, these nanowires will be coupled to the edges of nanocubes (see Figure 2 for a SEM image of a cluster of silver nanocubes [1]) in order to form a large open ordered cubic mesostructure. Before this can be accomplished, well-defined nanocubes and nanowires with a small size-distribution need to be formed. 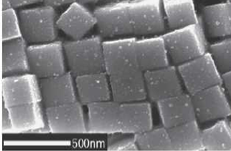 Figure 2: A cluster of silver nanocubes

This project is performed by: Michiel Maas and Wouter Maijenburg