Due to the COVID-19 crisis the PhD defence of Jorn Witteveen will take place (partly) online.

Jorn Witteveen is a PhD student in the research group Physics of Interfaces and Nanomaterials (PIN). His supervisor is prof.dr.ir. H.J.W. Zandvliet from the Faculty of Science & Technology (S&T). 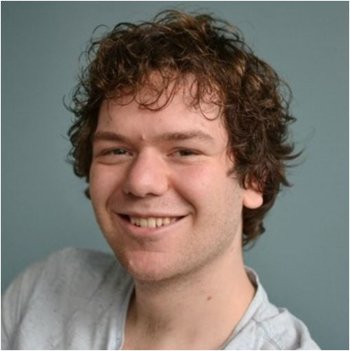 A single-crystal is a solid object in which an orderly three-dimensional arrangement of the atoms is repeated throughout the entire volume. A polished single-crystal makes for a very well-defined substrate. Therefore, crystals are used extensively in surface physics, catalytic chemistry, and the investigation of material properties. Improvements in single-crystal fabrication have historically enabled leaps in technological advancements and opened new paradigms of scientific understanding.

The growth of elemental metal single-crystals is usually achieved through classic growth techniques such as the Czochralski or floating zone methods. Drawbacks of these techniques are the susceptibility to contamination from the crucible and thermal stress-induced defects due to contact with the ambient. These drawbacks can be mitigated by growing in a containerless environment, which can be achieved by using electromagnetic levitation (EML). EML relies on the Lorentz force that acts between a levitation coil and the metal sample.

In this thesis we report on the development of a novel crystal growth apparatus that employs electromagnetic levitation in a vacuum to grow metal single-crystals of superior quality and purity. This apparatus enables two growth modes: containerless undercooled crystallization and levitation-based Czochralski growth. The system can levitate a wide variety of metals while having precise control over the sample temperature in both the liquid and solid state within 1~K. As a proof of concept, we show the successful containerless growth of copper single-crystals. These crystals are at least equal in quality to commercially available single-crystals grown using the traditional Czochralski technique. As such, we made an essential contribution towards improving the currently available state-of-the-art crystals.

Due to the COVID-19 crisis the PhD defence of Jorn Witteveen will take place (partly) online.