Due to the COVID-19 crisis measures the PhD defence of Dennis Reurink will take place online without the presence of an audience.

Dennis Reurink is a PhD student in the research group Membrane Science & Technology (MST). His supervisors are prof.dr.ir. W.M. de Vos and prof.dr.ir. H.D.W. Roesink from the faculty of Science and Technology. 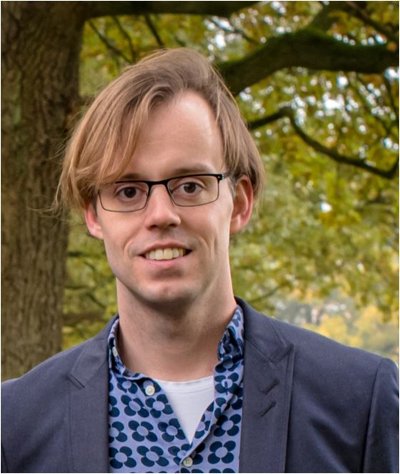 This thesis presents and discusses a variety of novel methods to control, manipulate, and modify the properties of polyelectrolyte multilayers (PEMs) for membrane applications. PEMs are thin polymer coatings, usually in the order of 5–50 nm, that are comprised of charged polymers called polyelectrolytes (PEs). Using the layer-by-layer (LbL) method, polyanions (negatively charged PEs) and polycations (positively charged PEs) can be alternately adsorbed onto any charged surface independent of geometry. The LbL approach is simple, whereby the desired substrate (e.g. a support membrane) is simply immersed in an aqueous solution containing a small amount of PE (0.1 g/L) and some salt (0−0.5 M). After the first PE layer is deposited onto the substrate, the sample is rinsed and then immersed into a second aqueous solution containing the oppositely charged PE. In this manner, a desired number of layers can be built/prepared with precise control over the final thickness of the PEM. Furthermore, LbL deposition of PEs is a very versatile approach, allowing for control over not only the thickness, but also over the charge and density of the PEM, simply through changes in salt concentration, pH, and types of polyelectrolyte used. Throughout this thesis, PEM density refers to the packing density of the polyelectrolytes within the multilayer and swelling of the multilayer. The density in essence can be thought of the intrinsic pore size of the PEM – a denser PEM will have a lower pore size and will result in a higher resistance to water transport. PEMs that have a higher swelling will be more hydrated and will therefore have a lower density as opposed to PEMs that swell less. Due to its versatility and simplicity, the LbL method is very suitable for preparing novel membrane materials since PEMs can be easily coated on the inside of hollow fiber membranes, creating so-called hollow fiber PEM nanofiltration (NF) membranes. Access to the  hollow fiber membrane geometry is highly advantageous, mainly because they have a smaller aspect ratio as well as lower fouling potential (no need for spacers) in comparison to flat sheet membranes.

The overarching aim of this thesis was to control the separation properties of PEM membranes and to create denser PEMs for increased membrane selectivities. The entirety of this thesis is based on varying the contents of the deposition solutions from which the PEMs are built, in order to increase the density and selectivity of PEM separation layers. A popular and well-studied PE pairing used in the fabrication of PEM membranes is that of the polycation poly(diallyldimethylammonium chloride) (PDADMAC) with the polyanion poly(sodium 4‑styrenesulfonate) (PSS). This PE pairing is so highly studied because it results in membranes with good separation properties and excellent chemical and physical stability. This high stability means that these PEM membranes can be cleaned without harming or degrading the active separation layer (i.e. the PEM layer) of the membrane. However, in such multilayers, PDADMAC is typically in excess and it is shown in Chapter 2 that this non-stoichiometry within the PEM means that control over membrane surface charge and thus membrane separation properties is lost. This results in significant drops in sulfate retentions from 94% to 39%, indicating an increase in positive surface and bulk charge. In Chapter 2, it is shown for the first time on PEM membranes, that salt annealing can play an important role as a post-treatment step to regain control over the surface charge of such PEMs and thus over the separation properties of the membranes. Salt annealing just before the final PSS deposition step overcomes this PE excess problem and results in membranes with sulfate retentions of up to 97% and an even higher water permeability than multilayers membranes where no excess of PDADMAC is observed.

In the previous paragraph, a post-treatment step was performed in order to regain control over membrane surface charge. While in Chapter 3, an alternative post-treatment step was studied to increase the packing density of the PEM thereby achieving higher selectivities toward dissolved solutes. Here, it was shown that terminating a PSS/poly(allylamine) (PAH) multilayer with a single layer of Nafion, a highly fluorinated and therefore very hydrophobic polyelectrolyte, results in a 50% reduction in PEM swelling during membrane operation. This pronounced decrease in multilayer swelling was led to PEM membranes with desired properties such as higher selectivities towards micropollutants (pesticides, medicine, and hormones) and lower molecular weight cut-off (MWCO) values, albeit at the cost of small decreases in water permeability. The selectivity of these Nafion-containing PEM membranes was further improved when an asymmetric PEM structure was constructed. Here, coating of a Nafion/PAH multilayer on top of an already assembled PSS/PAH multilayer increased average micropollutant retentions to 97%. Interestingly, while the use of Nafion resulted in denser PEM membranes, salt retention remained similar, meaning that the retention of salts and organic solutes can be decoupled and separately tuned. This capability of PEM-based membranes is remarkable since for conventional polyamide based thin film composite nanofiltration membranes, the density of the layer strongly influences the retention of both salts and small organic solutes.

The ability to decouple salt and organic solute retentions is taken a step further in Chapter 4. Here, a different asymmetric PEM system is studied with the goal to create membranes that retain micropollutants but not salt. This concept is of great interest because it would allow removal of micropollutants from drinking water of from waste streams without altering the salt balance. Asymmetric PEMs with bottom layers of  PSS/PAH and top layers of PAA/PAH were prepared. PSS/PAH is a more open PEM and is coated to ensure that the pores of the supporting hollow fiber membrane are fully closed. Conversely, PAA/PAH is a much denser PEM and this layer acts as the selective top layer or separation layer. Using this design, PEM membranes were fabricated with high water permeability (12.8 L∙m−2∙h−1∙bar−1), high micropollutant retentions (on average 98%), and low salt retention (10–15% of NaCl). Overall, this asymmetric design approach to creating PEMs results in membranes with unique separation properties, where the very thin (4 nm) selective top layer determines the separation performance and gives the membrane a high water permeability.

In PEM membrane literature, most focus has been on just a few PEM systems (PSS/PDADMAC and PSS/PAH), and there is surprisingly little understanding on the role of specific polyelectrolytes in PEM membranes. For this reason, Chapter 5 provides a fundamental characterization of PEMs combined with their membrane separation performances to obtain insight into the connection of PEM structure and separation properties. Specifically the role of the polycation is studied where PSS-based PEMs are prepared together with the vastly different PAH, poly(ethylene imine) (PEI), or poly(4-aminostyrene) (PAS). In addition, the effect of crosslinking by glutaraldehyde was studied since all polycations contain primary amines. By carefully studying the layer growth, excess charge, and separation properties, it was shown that PSS/PAS and PSS/PEI gave membranes that had an overall negative bulk and surface charge, whereas PSS/PAH gave positively charged membranes. These material properties resulting from the polycation chemistries could be directly coupled to PEM membrane performance. Here, PSS/PEI and PSS/PAS have high retentions toward Na2SO4, whereas high retentions toward MgCl2 were shown for PSS/PAH. In addition, it was shown that PSS/PAS membranes were very open with a permeability of 22 L∙m−2∙h−1∙bar−1, whereas PSS/PEI membrane were denser and had permeabilities of just 4 L∙m−2∙h−1∙bar−1. The density of the different PEMs was reflected in MP selectivity we PSS/PEI showed overall the highest retention. Moreover, a generic effect of crosslinking with glutaraldehyde was shown where for all PEMs, crosslinking resulted in denser and more selective PEM membranes at a cost of lower permeability. The versatility of PEM membranes shown in this work with widely different separation properties allows for the choice of the optimal PEM for a specific application.

The two densest PEMs from the previous chapter, PSS/PAH and PSS/PEI, were subsequently studied for forward osmosis (FO). In Chapter 6 the connection between PEM structure and FO performance is made and it is shown that PEM based membranes can be successfully used in FO when the right combination of PEM and draw solution is selected. The performance of both the PEM membranes was assessed using different draw solutions, namely NaCl, MgCl2, MgSO4, Na2SO4, and Na3C6H5O7 (trisodium citrate abbreviated to TSC), all at equal osmotic pressure. Chapter 5 already showed that the PSS/PAH membrane is overall positively charged and the PSS/PEI is overall negatively charged. This charge behavior resulted in the PSS/PEI membrane having low reverse salt fluxes for the multivalent anions TSC and Na2SO4, whereas the PSS/PAH membrane showed the lowest reverse salt flux for a multivalent cation, MgCl2, draw solution. This already shows that by combining the right PEM with the right draw solution, PEM membranes can operate effectively in a FO process. Interestingly, when retaining micropollutants during FO operation, Donnan–dialysis was observed where the sodium ions of the TSC draw solution selectively exchanged with the positively charge micropollutant atenolol. When the draw solution was changed to sucrose, containing no sodium ions, the atenolol retention increased sharply from −211% to positive retention values.

PEMs can also be combined with biomimetic membranes that are based on the natural water selective aquaporin protein. The aquaporin protein is stabilized into a robust polymeric vesicle called a proteopolymersome (150-200 nm) that is slightly positively charged. In Chapter 7, these two promising systems are combined to form proteopolymersome multilayers (PPMs) in combination with the polyanions; poly(acrylic acid) (PAA) and PSS.  By carefully monitoring the PPM buildup, it was shown that PPMs can have good layer growth when the vesicles are alternately adsorbed for both PAA and PSS. The PPM where subsequently applied to the inside of hollow fiber support membranes to create PPM based membranes. Here, PAA based PPMs where shown to be defective in membrane performance experiments whereas PSS based membranes demonstrated very relevant NF performance. The PPMs did not show improved membrane performance in comparison to PEMs (PSS/PAH and PSS/PDADMAC), but the charge inside the multilayer was reversed to negative instead of the positive charge present in the PEMs. Combining PEMs and biomimetic approaches can lead to relevant NF membranes and add to the versatility of both systems.

As a whole, this thesis highlights that by only changing the ingredients of the deposition solution, by adding a post-treatment step, or by changing the design, widely different PEM membranes can be fabricated. The unique versatility of PEMs allows for precise control over layer properties which then translates into control over the PEM membranes separation behavior. Although no PEMs were created in this thesis that show an increased retention toward salt, in particular NaCl, denser PEMs with lower MWCO and higher micropollutant retention were constructed. Therefore, this thesis shows that salt and small organic molecule retention can be decoupled. For this reason, the future of PEM membranes will lie in the asymmetric design whether it is asymmetry induced by PEMs themselves, aquaporin containing layers, or other combinations.

Due to the COVID-19 crisis measures the PhD defence of Dennis Reurink will take place online without the presence of an audience.