Roughly, all optical methods can be divided into three subclasses:

In 2007, an entirely different approach was demonstrated by Ivo Vellekoop and Allard Mosk (see doi:10.1364/OL.32.002309). In this approach, called wavefront shaping, the incident light beam is modified in such a way that the scattered light converges to a chosen point inside the scattering material (see figure) 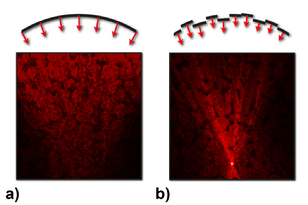 a) When you try to use a lens to focus light inside tissue, the light gets scattered and no focus is formed.
b) By shaping the wavefront of the incident light, the scattered light can be directed towards a focus at any desired position.

The idea of wavefront shaping is to use a spatial light modulator to construct a wave that exactly matches the microscopic scattering properties of the object. At this point, the scattered waves interfere constructively, generating a sharp and intense focus.

Finding the matching wavefront for focusing at a given point is far from trivial: a different wave is needed for each sample and for each point in that sample. Since 2007, many approaches have been investigated, including feedback from fluorescently labelled nanobeads, ultrasound tagging, photoacoustic feedback, focusing on moving objects, second-harmonic generation, and many more. So far, none of the approaches are completely suitable for biomedical imaging yet. Finding better approaches and improving existing ones currently is the subject of intense research.

In conclusion, it is possible to focus light sharply deep inside scattering tissue, if ‘only’ you know the matching wave to send in. Such a focus can be used for imaging (for instance, raster scanning fluorescence microscopy), potentially achieving sub-micrometer resolution up to a depth of several centimeters, enabling microscopy through the intact skin. In addition, one could use the intense focus to manipulate or kill individual cells. Therefore, we are researching new and improved ways of focusing light deep inside tissue and using scattered light for high-resolution imaging.