1975! It was quite a show: a mighty colossus of over four thousand kilos being placed on the backyard of the WB building (now: Horst). This 'jaknikker' (literally: the nodding one) was a gift of the Dutch Oil Company (NAM) to Isaac Newton, the study association of mechanical engineering. In 1975, the study association celebrated its 10th birthday. Before being placed on the UT campus, the 'jaknikker' had been used by the NAM from 1951 onwards in the oil fields of the Dutch province Drenthe. 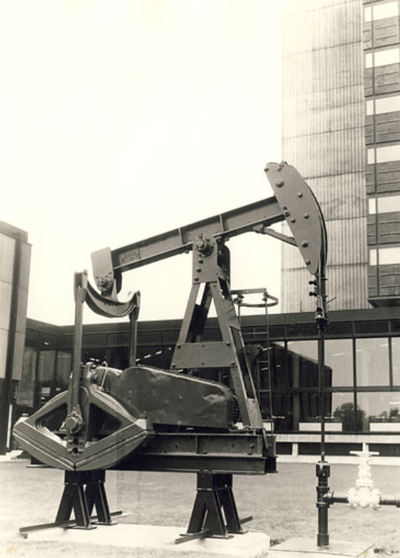 The study association celebrated its lustrum by organising (amongst others) a symposium about energy. Accompanying this symposium, the association was looking for a tangible souvenir. And, of course, it had to be a typical mechenical engineering souvenir! It had to be big, made of iron, with a lot of truncheons, bolts and pipes, and it should be moving as well. The 'jaknikker' fitted these requirements perfectly. Together with the NAM, students of Isaac Newton picked a little 'jaknikker' that was no longer in use.

In the beginning of 2005, the 'jaknikker' suddenly disappeared: it needed to undergo some thorough renovation. The renovation works should have been ready before the lustrum celebrations in September 2005, but it was only in 2007 that the 'jaknikker' was placed back on his spot behind the Horst. It has been in place ever since.