In his thesis research Wojciech Kwiecinski collaborated in a project with the University of Twente, Technical University of Eindhoven and Canon Production Printing company from Venlo (formerly known as Océ). Under the title Fundamental Fluid-dynamical Challenges in inkjet printing a group of PhD’s, post-docs and supervisors addressed several fundamental aspects, critical process steps and proofs of principle.

Next to two monthly work meetings in Twente and Venlo, knowledge was shared and new collaborations were started in workshops and multidisciplinary group meetings. ‘The dynamics of the process I enjoyed very much so,’ Wojciech says. ‘We found a good balance between deepening practical process knowledge and performing generic fundamental research.’

Wojciech’s project was focused on the changes in wetting properties of solid surfaces involved in inkjet printing. In particular, he focused on the nozzle plate of the printhead. Surface-active agents (so-called Surfactants), which are commonly added to liquid mixtures, stand out as having an unexpectant impact on the interaction at solid-liquid interfaces. As Wojciech explains in his thesis work. 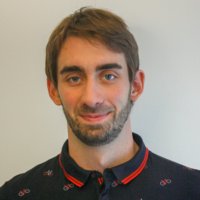 As an example of his work, Wojciech mentions the spreading properties of a water and solvent (hexanediol) mixture. ‘We found that this mixture was not spreading on the surface we investigated. This feature we didn’t expect at all,’ he says. ‘We found two physical phenomena occurring in the liquid at the same time. On the one hand, there was a strong flow within the droplet. On the other, we found the adsorption of molecules of solvent on the surface, which changed its character to more hydrophobic. These parallel phenomena were influencing the droplet shape in multiple concentration ranges. The road towards finding this explanation was an exciting challenge.’

During his PhD project, Wojciech published in several scientific journals including Langmuir and Journal of Colloid and Interface Science. ‘My work was not solely fundamental,’ Wojciech says. In studying wetting properties he stayed close to the interfaces and solvents used in modern printing processes.

‘In a creative way we managed to find a middle way,’ Wojciech explains, ‘to generate generic and publishable results, and yet interesting insights for Canon’s knowledge base in complex future printing processes. The cooperation of our Mesa+ group, Physics of Interfaces and Nanomaterials (PIN), with Canon is long-term. So, everyone is aware of the role he plays.’

Wojciech stresses the importance of the equipment facilities, available at Mesa+. ‘For example, Atomic Force Microscopy (AFM), ellipsometry and optical measuring and imaging are accessible for Canon during the PhD research projects,’ Wojciech says. ‘When I started as a PhD, I felt very privileged being able to work with this state-of-the-art equipment. For example, performing XPS (X-ray photoelectron spectroscopy) measurements together with operator expert Gerhard Kip, I greatly appreciated.’

Wojciech plans to stay in research in his future career. ‘I learned that I like this job, and I discovered I can make some good contributions,’ he says. ‘In the future, I would like to do research closer to market applications, a route that was not always possible during the PhD project. I am very curious to explore this route more. In collaborating with Canon experts, I learned that company researchers work together in a good spirit and atmosphere, on exciting challenges.’