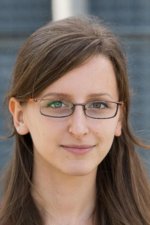 In this thesis bubble injection in convective flows is central. ‘It proved a useful method of enhancing heat transfer,’ says Biljana Gvozdić.

Already in the first half of her PhD, Biljana showed some nice results of her work while performing experiments in a rectangular column, heated from one side and cooled from the other. ‘Then, we injected bubbles homogeneously,’ she says. ‘We found that two completely different mechanisms govern the heat transport in flows with and without bubbles.’

In the single-phase case the natural convection is driven solely by the difference between the wall temperatures. In the case of bubbly flow, bubble induced diffusion appeared dominant for heat transfer. ‘Injection of bubbles induces up to 200 times stronger temperature fluctuations,’ Biljana concluded.

Even the more surprised Biljana was on studying the prominent effect of inhomogeneous injection of bubbles on the overall heat transport.

‘This finding we explained by the multiple mixing mechanisms present in the setup, once a gradient of gas volume fraction was imposed,’ she says. ‘The large-scale circulation of the liquid phase, induced by inhomogeneous bubble injection, leads to the occurrence of a shear layer between the fluid region injected with bubbles and its opposite side. We were happy to publish our findings in the Chemical Engineering Science journal and Journal of Fluid Mechanics. ’

‘We did so from scratch,’ Biljana says. ‘It was a multiple team work achievement. First we collaborated with colleagues from the Physics of Fluids Group and our highly specialized technicians. Further, we received valuable input from the companies involved in the project group: Akzo Nobel, Tata Steel, Shell, DSM and Sabic, as well as from the PhD’s involved in this national project on heat and mass transfer in bubbly flows. We took into account the relevant environmental operating conditions and future research objectives.’

Biljana is convinced this unique and advanced Tunnel equipment will be of value in Twente for many years to come.

One of the first experiments to be performed in the Twente Water Tunnel, will be to explore the fundamentals of heat transport in bubbly flows in the presence of salt.

‘Heat transfer in salt solutions (e.g. brine) is highly relevant for certain industrial applications such as chlorate processes, heat exchangers, ’ Biljana says. ‘The objective was brought on by our industrial partners.’

Biljana: ‘I would like to pursue a career in industry and focus on solving practical problems more. At the same time, I am convinced that thinking as a physicist, searching for underlying explanations, can be of great added-value in industrial R&D. I hope to find this attitude towards research in my future job as well.’