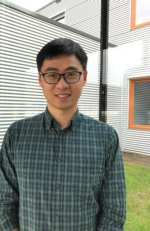 In this thesis solar driven water splitting is central, being a promising way to produce renewable energy-based resources.

Several strategies have been applied to understand particular functions of the SrTiO3-based photocatalyst and to improve its performance for POWS. 'At first, the results were not really stable,' Kai says. 'But that was to be expected. After that I followed two promising new routes that worked out very well.'

First, surface modification by Ni/NiO co-catalyst showed improved reaction kinetics. Second, the incorporation of Mg into the SrTiO3 bulk showed an increase in charge separation. Here, the deposition of CrOx allowed for improvements in photocatalyst stability.

Mg-modified photocatalysts were studied using X-Ray Powder Diffraction (XRD) and Raman characterization measurements. 'Together with deposition of Ni/NiO or Pt co-catalyst, we were able to show dramatic improvement in POWS rates,' Kai says. 'Professor Guido Mul, my promotor, and my daily supervisor Bastian Mei, were impressed and as surprised as I was about the results in this quite new experimental approach in which I made some bold steps.'

Kai: 'They encouraged me to follow this route of research. I synthesized and prepared the materials and catalysts myself, and built up the different experimental setups and characterization techniques. During the second year of my PhD my confidence increased, after the first results were promising.'

'I really focused on this path of research, leading to application relevant results. We reached a quantum efficiency of 30%, under 365 nm LED light illumination. The material stability was improved considerably, controlling better the leaching behavior and the back reaction of formed H2 and O2 (into water again). I hope that a master student or successor PhD student will pick up my work, to further understand and improve these mechanisms.'

Also, the photocatalytic performance of Al:SrTiO3 and Mg:SrTiO3 were compared, as two emerging semiconductor materials. Kai: 'In the last chapter I argued that the field of co-catalyst/semiconductor interfaces is promising and worthwhile to study, and to think about first future application areas.'

Kai perceived working within Mesa+ advantageous and encouraging. 'As a member of the Photocatalytic Synthesis, I profited from a collaboration with three other groups, sharing each other's expertise and equipment,' he says. 'I liked the open atmosphere very much. Colleagues were always willing to share knowledge and open to collaboration. Also the work of master and bachelor students was very helpful. I liked to work with them on sub themes of my PhD work.'

'After my Defense I will go and work as a post-doc at the University of Utrecht. The field of research is different but very related: I will be working on using electrochemistry for novel CO2 reduction strategies and on using CO2 as an energy source at the same time. I like to pursue a career in academics, as I am not limited to work on my own ideas then. By doing so, I learn more and enjoy performing research best.'