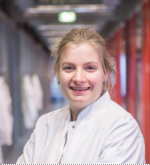 ‘These thin films are about one hundred nm thick,’ says Evelien Maaskant. ‘They can be used in membranes for gas separation, reverse osmosis or nanofiltration. However, several other potential applications are imaginable and feasible, especially as new functional monomers are incorporated within these films.’

This thesis focuses on novel monomers to be synthesized and polymerized by interfacial polymerization. In one of the first chapters, a star-shaped trifunctional acyl chloride monomer was used. ‘We compared the membrane performance to that of conventional polyamide membranes,’ says Evelien.

In the other chapters non-polyamide networks were described, prepared and characterized. For example a significant reduction of swelling (in n-hexane and ethyl acetate vapor) was found in the hybrid poly(PDMS-POSSimide) films, as compared to conventional PDMS.

Also the cross-link density of hexachlorocyclotriphosphazene (HCCP), as prepared by the interfacial polymerization with an aromatic biphenol, was shown to be controllable. ‘This resulted in different morphology and mechanical properties,’ Evelien writes.

Also within this thesis the stability of a membrane against extreme pH-conditions was addressed.

Here, a series stable poly(aryl ether) films were described. The poly(aryl ether)s were prepared by the interfacial polymerization of cyanuric chloride (CC) with (fully) aromatic tri-alcohols. By eliminating the carbonyl bond - as present in commonly used polyamide and polyester membranes - these membranes are more stable when functioning under severe pH conditions.

Finally, the synthesis of hyperbranched poly(aryl ether ketone)s (hb-PAEKs), using a multifunctional monomer (AB2) approach, was described. This approach resulted in a hb-PAEK with fluorine end-groups that could be modified to alter the properties of the polymer.

The fluorine end-groups were partially replaced by 4-(phenylethynyl)phenol (PEP) end-groups, of which the alkyne moieties cross-link upon heating. The curing behaviour and gas separation performance of the hb-PAEKs with and without PEP were studied. The subsequent chapter focused on the preparation of a ceramic porous hollow fiber, that proved stable under harsh conditions and provided mechanical strength to a thin film prepared by interfacial polymerization.

Evelien was a member of the Films in Fluids group, and her PhD work was supervised by Professor Nieck Benes. ‘In several chapters we collaborated with the Novel Aerospace Materials Group, led by Professor Theo Dingemans of TU Delft,’ Evelien says. ‘The materials we synthesized were tested under high temperature conditions.’

Evelien also collaborated with the Mesa+ Materials Science and Technology of Polymers group, led by Professor Julius Vancso. ‘In characterizing the synthesized films, we used their AFM expertise,’ Evelien says. ‘This resulted in a joined publication.’

‘As a PhD researcher you have to be far more creative than as a master student researcher. In a complex research field containing new domains of knowledge, unexpected and unpredictable processes and outcomes occur. In deepening your knowledge base – in my case, especially polymer chemistry – and in collaborating with experts in other fields, one can maximize the chance to achieve valuable results. One of the extra skills I learnt within the PhD project, was to report and communicate these results to my professional colleagues as well as to a broader audience.’

Evelien hopes her exploratory and innovative PhD research will be continued successfully. ‘Other researchers will proceed with some of the key results from my work,’ she says. ‘Especially scale-up research will be decisive for possible future applications.’

‘After my PhD Defense I favour a job outside academia. In a challenging R&D research environment, I hope to design and perform strategic experiments.’