Due to the COVID-19 crisis the PhD defence of Akshay Koodly Ravishankara will take place (partly) online.

Akshay Koodly Ravishankara is a PhD student in the research group Engineering Fluid Dynamcs (EFD). His supervisor is prof.dr.ir. C.H. Venner from the Faculty of Engineering Technology (ET). 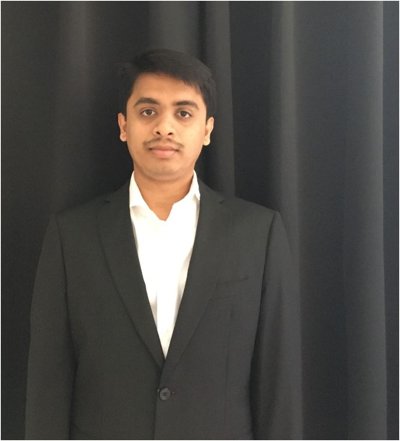 Wind turbine aerodynamics spans a wide range of scales starting from the millimeter thick boundary layers up to atmospheric flows. Analysis of each of these scales have traditionally been performed using simplified or ’engineering’ models. However, with simplifications also come uncertainties. In order to reduce the uncertainties and also to improve the design process, more accurate analysis tools are necessary. Computational Fluid Dynamics (CFD) based methods are being used to fill this need. This thesis presents the development and application of an incompressible pressure based solver. The new solver has been developed within the framework of SU2, an open source collection of C++ based software tools for multi-physics analysis.

Wind turbines operate under "incompressible" conditions and the CFD methods are based on solving the Navier-Stokes equations in the incompressible form. The main difficulty in solving the incompressible Navier-Stokes equations lies in resolving the pressure velocity coupling. Various approaches have been proposed over the years to overcome this difficulty and in this work the SIMPLE algorithm is used. The common link among all the approaches to resolve the pressure velocity coupling was the use of staggered grids, where pressure and velocities are stored at cell centers and cell faces respectively. The staggered grid comes with its own disadvantages, especially for modern day industrial problems. A momentum based interpolation technique is used to allow for the SIMPLE algorithm to be applied on collocated grids. The effect of turbulence is modeled using the eddy viscosity based Spalart-Allmaras (SA) and the k-ω Shear Stress Transport (SST) models. Verification of the new solver is carried out using Couette flow problems where analytical solutions to the Navier-Stokes equations can be found. Validation of the new solver is carried out using widely studied problems like flow over a flat plate, backward facing steps and cylinder.

Due to the COVID-19 crisis the PhD defence of Akshay Koodly Ravishankara will take place (partly) online.