Anouk Bomers is a PhD student in the research group Marine and Fluvial Systems (WFM). Her supervisor is prof.dr. S.J.M.H. Hulscher from the Faculty of Engineering Technology. 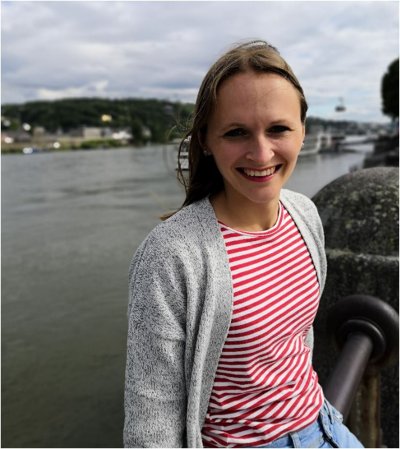 River floods are a major global hazard causing extensive damage and loss of lives. To protect the hinterland from severe inundations, flood defences are commonly designed according to appropriate safety levels that are determined based on a statistical return period. To estimate discharges associated with different return periods, flood frequency analyses are used that fit a distribution to the data set of annual maximum discharges.

The data sets of measured annual maximum discharges are generally in the order of 100 years. Consequently, the predicted design discharges with a return period of e.g. 100,000 years are based on extrapolation and therefore highly uncertain. To decrease the uncertainty of flood frequency relations, historical flood information can be added to the data set of measured discharges.

We aimed to study the effect of extending the data set of measured discharges on the reduction of the 95% uncertainty interval of flood frequency relations. The data set was extended with reconstructed historic flood events using hydraulic modelling approaches. The Rhine delta was used as a case study, but the proposed methodologies can also be applied to other river basins and coastal areas provided that sufficient data is available.

A drawback of reconstructing historic flood events with the use of hydraulic models is the high computational cost. Because historical information is limited and uncertain, many model runs have to be performed to include these uncertainties in the analysis. Therefore, the hydraulic model must be efficient in terms of model accuracy and computational time. We first developed a fully two dimensional (2D) hydraulic model, after which we simplified this model to achieve a data driven model, referred to as a response surface surrogate model. By simplifying the model, computational times are reduced. However, it is important that the simplified models are still capable of reproducing the desired output.

The outline of this thesis is as follows.

In Chapter 2, we show which 2D grid is most efficient in terms of model performance. We compared structured rectangular, unstructured triangular and hybrid (consisting of both structured and unstructured grid cells) grids with a high and low resolution. The performance of both the non-calibrated and calibrated models were compared based on simulated water levels. Furthermore, flow velocities in a meander bend were evaluated to assess the correctness of the physical processes. We show that there are three important grid generated features that influence model results, namely: (1) bathymetry accuracy and (2) numerical friction, both as a result of grid resolution, and (3) numerical viscosity as a result of grid shape. Numerical friction and numerical viscosity have the same effect on model results as physical bed friction has, namely attenuating the discharge wave and in increasing the simulated water levels.

In Chapter 3, we developed a 1D-2D coupled model, also referred to as a lower-fidelity physically based surrogate model, to study whether this model can replace a fully 2D model to reduce computational time. In this simplified model, the main channel and floodplains are schematized by 1D profiles and the embanked areas are discretized on a 2D grid. We used this model to perform a sensitivity analysis to analyse which parameter has the highest impact on maximum discharges during a flood event. In 1926 the largest measured flood event has occurred. This flood event was used as a case study. We conclude that the model output is most sensitive to the roughness class with the largest share in surface area. Furthermore, we show that the 1D-2D coupled model is capable of producing model results with the same accuracy as a fully 2D model. Therefore, the 1D-2D coupled model was used as a high-fidelity model in the next Chapter.

In Chapter 4, we developed a surface response surrogate model with training data created with the 1D-2D coupled model. This data driven surrogate model has no physical interpretation, but reproduces the input-output relations of the high-fidelity model based on simple mathematical functions. As a result, many model runs can be performed within a couple of seconds. We reconstructed the maximum discharge at Lobith (German-Dutch border) during the 1809 flood event based on measured water levels of surrounding locations. Chapter 4  shows that the confidence intervals of the 1809 maximum discharge are reduced compared to the results of existing methods that did not use hydraulic models to perform the reconstruction.

Before historic flood events can be added to the data set of annual maximum discharges, they must be normalized for natural and anthropogenic changes in the river system. To do so, the upstream discharges of the historic flood events were routed over the present geometry using the 1D-2D coupled modelling approach (Chapter 3). In Chapter 5, we show the present system behaviour of the Rhine delta as a result of various upstream discharges. Dike breaches are included in the model domain as random input parameter resulting in various overland flow patterns. We conclude that dike breaches and resulting overland flow patterns may significantly change the discharge partitioning of and flood risk along the Dutch Rhine river branches.

Anouk Bomers is a PhD student in the research group Marine and Fluvial Systems (WFM). Her supervisor is prof.dr. S.J.M.H. Hulscher from the Faculty of Engineering Technology.