on segregation in bidisperse granular flows

Irana Denissen is a PhD student in the Multiscale Mechanics Group (MSM). Her supervisor is prof.dr. A.R. Thornton from the Faculty of Engineering Technology (ET). 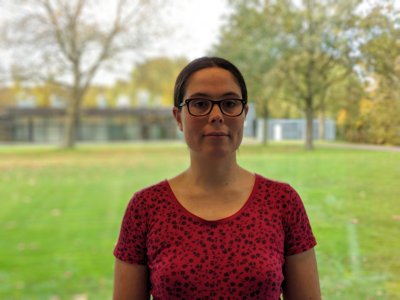 Every year, thousands of people die due to landslides, avalanches and other natural disasters in which separate particles play an important role. For accurate zonation and risk assessment, efficient models are needed that not only take into account the basal topo\-graphy, but also the properties of these particles (snow, rock, sand, etc.), such as size- and shape-distribution. The conglomoration of particles is called a granular material, and the flow of a granular material is a granular flow.

When a granular material is composed of multiple components that differ in e.g. size, density or shape, the mixture usually segregates into separate phases when sheared or shaken. For example in a size-bidisperse flow over an inclined plane, which contains large and small particles, the larger particles tend to the free surface, while the small particles tend to the base. Both the cause of segregation and the phenomenological aspects are active areas of research. This thesis looks at the latter; it aims to develop efficient and accurate models of granular flows, in particular of bidisperse granular flows, which consist of two types of particles.

We start in chapter 2 by considering the flow of a monodisperse granular material down a rough inclined channel with downslope contracting sidewalls.  Utilising a depth-averaged shallow granular theory together with an empirical constitutive friction law, an extended one-dimensional (depth- and width-averaged) granular hydraulic theory is presented. For a range of upstream flow conditions and channel openings, the one-dimensional model predicts three different steady states, where the velocity and height of the flow do not change over time. The three states are: smooth subcritical flows, supercritical flows with weak oblique shocks (smooth when width-averaged) and flows with a steady jump in the contraction region. Both the super- and subcritical flow states are verified by numerically solving the depth-averaged two-dimensional shallow granular model. Despite the strong inhomogeneities in the contraction region, the one-dimensional solutions match well with the two-dimensional solutions that are averaged across the channel.

Next, we consider  size-bidisperse flows over a uniform, long, narrow channel, where the larger particles segregate towards the free surface. As the surface velocity of such flows is larger than the mean velocity, the larger material is transported to the flow front. This causes size-segregation in the downstream direction, resulting in a flow front composed of large particles. Since the large particles are often more frictional than the small, the mobility of the flow front is reduced, resulting in a so-called bulbous head; the flow-front is thicker than its tail. Chapter 3 focuses on the formation and evolution of this bulbous head, which is shown to emerge in both a depth-averaged continuum framework and discrete particle simulations. Furthermore, numerical solutions of the continuum model converge to a travelling wave solution, which allows for efficient computation of the long-time behaviour of the flow. Using small-scale periodic discrete particle simulations to calibrate (close) the continuum framework, the simple one-dimensional model is validated with full-scale three-dimensional discrete particle simulations. The comparison shows that there are conditions under which the model works surprisingly well given the strong approximations made; for example, instantaneous vertical segregation.

In order to compare discrete particle simulations with continuum fields, the discrete particle data needs to be mapped on these continuum fields. Chapter 4 shows a novel micro-macro technique called anisotropic coarse graining, which is able to obtain continuum fields from the discrete particle data with different length scales in different directions, while conserving both mass and momentum and being grid independent. This is especially helpful in shallow flows with elongated flow features, such as breaking segregation waves or subtle downslope segregation patterns. Applying the anisotropic coarse graining technique to bidisperse shallow granular flows over a rough channel, the resulting concentration fields show that microscopic friction of the particles is one cause of segregation in these flows. Furthermore, the sharpness and length of breaking segregation waves depends on the size ratio of the particles and height of the flow: the breaking segregation wave becomes sharper and narrower with increasing ratio of particle sizes and decreasing flow height.

Irana Denissen is a PhD student in the Multiscale Mechanics Group (MSM). Her supervisor is prof.dr. A.R. Thornton from the Faculty of Engineering Technology (ET).