Emin Asik is a PhD student in the research group Nonlinear Solid Mechanics. His supervisor is prof.dr.ir. A.H. van den Boogaard from the faculty of Engineering Technology. 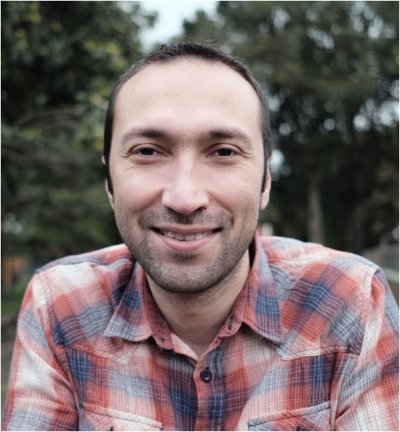 Advanced High Strength Steel (AHSS) sheets play an increasingly crucial role in engineering applications such as structural parts in the automotive industry, due to their desired combination of strength and ductility. Dual phase (DP) steels stand out among other AHSS grades since their mechanical properties can easily be adjusted by conventional heat treatment procedures without addition of expensive alloying elements. Versatile mechanical properties of DP steels originate from the presence of two mechanically diverse phases --- ferrite and martensite --- and the way they are dispersed throughout the microstructure. This dual phase structure with complex morphology brings scientific challenges for understanding and predicting the mechanical response especially in the damage regime.

Sheet metals are usually subjected to forming operations which involve deformation of the sheet into a desired shape. During forming, the sheet undergoes a large variety of stress states while being plastically deformed. In the case of DP steels, the formability of the sheet is strongly influenced due to development of ductile damage, which leads to loss of load carrying capacity or even unpredicted failure. Although damage evolution in single phase materials is well understood, the observations on more complex multi-phase alloys, such as DP steels, often exhibit contradicting outcomes. This is due mainly to the large diversity of the microstructural features even for the same grade of material and the resulting variations in the heterogeneous distribution of stress and strain fields. In order to develop an in-depth understanding of damage initiation and evolution, it is therefore crucial to understand the effect of microstructural morphology and interaction between the phases.

In this research, the effect of microstructural features on damage behavior is studied with a special emphasis on evolution of plastic deformation heterogeneity in microscale. This is carried out by performing experimental and numerical work on a ferritic-martensitic DP600 steel sheet from the AHSS family.

The experimental investigations are focused on  two aspects: (i) evolution of plastic deformation heterogeneity and lattice orientations in the grain scale and (ii) active damage mechanisms and distribution and evolution of damage during deformation. The former is carried out by electron backscatter diffraction (EBSD) measurements. The investigations revealed that before the deformation small orientation variations are present and hence there are geometrically necessary dislocations (GND) at the ferrite grain boundaries. With increasing deformation, lattice orientation spread of the grains increases due to heterogeneity in plastic deformation and therefore the GND content also increases. The density of GNDs tend to be higher around grain boundaries, but they also form highly non-uniform distributions inside the ferrite grains. Moreover, investigations around the voids showed high GND content mostly on one side of the voids. For the latter aspect metallographic cross sections are investigated and image analysis are performed. Two main mechanisms are identified for void formation: (a) by cracking of martensite and (b) decohesion at the ferrite grain boundaries. Voids formed by cracking of martensite grow perpendicular to the loading direction after complete failure of the martensite island. Therefore, these voids have a thickness of the martensite island from which they formed within. The voids that are formed at the boundaries stay thin and mostly grow along the loading direction, causing a higher length to thickness ratio. Image analysis of the spatial distribution  of the voids revealed a non-uniform distribution along the thickness of the sheet which is correlated with the distribution of martensite bands.

Accordingly, in order to capture the effect of lattice orientations and plastic strain heterogeneity, a strain gradient enhanced rate-independent crystal plasticity framework is implemented as a user subroutine for the commercial finite element package Abaqus/Standard. In this generic framework, a lower order approach is employed for the gradient enhancement. It was shown that the model is capable of predicting both structural and microstructural size effects. The model also showed that the local stress and strain states deviated from the macroscopically prescribed conditions on the RVE.

Numerical investigations of DP microstructure are focused on the effect of martensite distribution on (i) the stress and strain partitioning, (ii) the response of damage indicators and (iii) the evolution of pre-existing damage incidents. Firstly, it was shown that the average stress and strain of ferrite and martensite are affected significantly by the distribution and content of the phases. In particular, the martensite percentage affects the stress and strain partitioning due to the hardness contrast as well as the induced strain gradients within ferrite. On the other hand, the effect of martensite distribution is more pronounced on the initial hardening rate of the RVE. Secondly, after comparison of locations of experimentally observed damage incidents and numerical ones, it was seen that a plastic work based damage indicator is suitable for predicting damage locations and damage susceptibility of the microstructure. It was found that an increase in martensite content enhances the possibility of damage in both ferrite and martensite and a banded morphology triggers more damage in the martensite phase. Finally, it was found that evolution characteristics of voids are highly dependent on their locations and surroundings in other words the local stress and strain state. Moreover, the evolution does not follow a monotonic trend. Interestingly, in the simulations during tensile stretch some pre-existing voids shrink, which is an indicator of locally compression or shear type of loading. This also shows the variation of local state from the average prescribed condition. In general, a higher void growth rate is observed for the voids located in between individual martensite islands for the other voids.

Emin Asik is a PhD student in the research group Nonlinear Solid Mechanics. His supervisor is prof.dr.ir. A.H. van den Boogaard from the faculty of Engineering Technology.