Anne van Ommeren is a PhD student in the research group Biomechanical Engineering (BW). Her supervisors are prof.dr. J.S. Rietman and prof.dr.ir. P.H. Veltink from the faculty of Engineering Technology (ET). 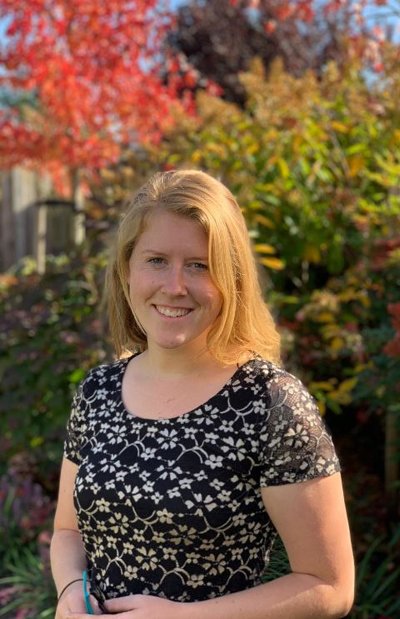 Not only are our hands essential to perform daily life activities, they are often used to express respect, love, and anger via non-verbal communication as well. After stroke, many patients have impaired hand and arm function. The use of rehabilitation robotics has shown to be useful to overcome such impairments. However, evidence of a transfer of robotic training effects towards improved functionality in daily life remains limited. After the rehabilitation period, limitations in performance of daily activities affects the independence and quality of life of stroke patients. Stroke patients can increase functional independence if they are supported directly by technology during activities of daily living (ADL) in their homes. However, in practice it appears to be difficult to apply such smart technology in ADL of stroke survivors possibly because the needs and preferences of the user are not adequately reflected in the devices. The ironHand glove, a wearable soft-robotic glove, was developed according to a user-centered design in order to support grip strength during daily life activities of people experiencing hand function problems. This thesis aims to increase our understanding on user requirements of assistive technology (AT), and on the usability and effectiveness of the ironHand system, to contribute to the development of assistive technologies to support the hand of stroke patients during ADL at home that meet the needs and preferences of the end-user. To reach this goal, the following research questions have been proposed in chapter 1:

What defines the user preferences concerning assistive technology designed for the upper limb of stroke patients?

Does prolonged, unsupervised, use of a wearable soft-robotic glove during ADL at home improve task performance of stroke patients?

Considering the limitations of pressure sensing as control input for the device, could the control of the grip-supporting glove be improved?

We started with a systematic review in chapter 2, to get more insight into the factors that can bring the design of AT to higher levels of satisfaction and acceptance. User perspectives from focus groups, questionnaires and interviews of nine studies were gathered. Barriers and enablers influencing the adoption of AT for the upper limb after stroke emerged within 5 overarching, but highly interdependent themes: (1) promoting hand and arm performance; (2) attitude toward technology; (3) decision process; (4) usability; and (5) practical applicability. The interdependency of the identified themes implies that all aspects influencing user perspectives of AT need to be considered when developing AT, and not just few of them, to enhance its chance of acceptance.

In chapter 3 user requirements of AT for the upper limb were identified through a focus group. The focus group results showed that unobtrusive support, intuitive use, and adaptability to the individual user and his or her disease severity are key for stroke patients. Opinions with respect to specific preferred control- and support options were diverse. After use, user preferences of four different modalities to control the soft-robotic glove, namely force, muscle activation, voice and wink, were gathered in chapter 4. User perspectives greatly varied, with four participants favoring force control, while each of the other modalities were chosen as favorite by two participants. System Usability Scale (SUS) scores were, on average, 70 or higher for force and voice control while muscle activation and wink received scores between 50-70. Usability of the ironHand glove, activated by pressure sensors, was assessed after one-time use (chapter 6) and prolonged use (chapter 7). In both studies, promising scores on the SUS were found (mean 71.6 (chapter 6), median 87.5 (chapter 7)). The SUS was supplemented with a semi-structured interview in chapter 6. In general, participants were positive about the glove. Several participants appreciated the glove having two glove-free fingers, which helped to maintain sensation during object manipulation. Also, the experience that the glove actually supports grip strength increased their perceived grip assurance and confidence when moving, which was appreciated. Contrary, the limitation of movement, the glove being not water resistant, and the loss of sensation were mentioned as points for improvement.

Direct effect of the soft-robotic glove

Feasibility of each of four control modalities (force, muscle activity, voice and wink) was tested to supplement subjective information in chapter 4. The number of attempts needed to control the glove did not significantly differ, and although highly interdependent, time needed to perform a reach-and-grasp task was significantly lowest with force control. In general, participants were positive about the control modalities, however, a weak correlation of subjective outcomes and objective measures was found.

We aimed to assess the direct effect of the ironHand glove on functional performance of the hand and arm in older adults (chapter 5) and the stroke population (chapter 6 & 7). Maximal pinch strength was positively influenced by the ironHand glove (chapter 6). In chapter 7, the direct effect of the glove was assessed with the Jebsen-Taylor Hand Function Test (JTHFT) in stroke. In line with previously performed studies assessing the effect of the ironHand glove on performance of the JTHFT in elderly, we did not find a positive effect of the glove on JTHFT performance. To better understand its influence on movement, in chapter 5 and chapter 6 kinematics of the upper limb were assessed during a reach-and-grasp task in which a cylindrical object had to be placed onto a platform at shoulder height with and without using the glove. In older adults with self-reported hand function limitations, the glove did not improve total movement time. When looking at kinematics in more detail, relative time needed to transport the heavy object was shorter with glove, while relative time needed to grasp the heavy object was longer. Additionally, transporting light objects occurred with a lower peak velocity and larger elbow extension, and grasping of the object involved a larger hand opening as compared to without glove. In stroke, alterations in joint excursion were particularly found in the wrist and shoulder, with corresponding larger compensatory movements of the trunk. In extension to the study with older adults, participants also wore the glove without being activated as an additional condition to assess the transparency of the glove. Activating the glove itself did not affect movement performance negatively, as compared to the glove on - support off. In contrast, negative effects on movement execution with activated glove use were related to wearing the glove itself.

Effect of prolonged use of the soft-robotic glove at home

Five stroke patients successfully used the ironHand glove four weeks at home. The effect of prolonged home-use the glove on JTHFT performance was assessed in chapter 7. Before and after home-use, the JTHFT was tested in a lab-environment. The prolonged use of the glove resulted in improved supported, and even unsupported, functional performance during tasks related to activities of daily life, as measured with the JTHFT.

Control of the soft-robotic glove

Based on the findings of the preceding chapters that focused on the user requirement identification, usability and effectiveness of the ironHand system, the idea arose to research the possibility to detect the intention to grasp earlier than the pressure sensors of the current version of the ironHand system in both healthy subjects (chapter 8) and stroke patients (chapter 9). In both studies, promising user-dependent accuracies were found (98.2% in healthy and 96.8% in stroke). In a user-independent situation, accuracies of 91.4% and 83.3% were achieved in healthy subjects and stroke patients respectively. In the offline setting, grasp could be classified accurately in more than 90% when using only half of the movement length in stroke. This would allow for an earlier detection of grasp of 750ms.

The main findings of the studies are discussed in conjunction in chapter 10, giving rise to recommendations for future research and development. In general, AT should be designed according to a holistic approach, taking the interdependencies of factors related to the adoption of AT into account. This thesis also indicated a clear need for personalization of devices, sufficient familiarization time with AT during research, and the need for suitable outcome measures when assessing their effects. Provided that the abovementioned recommendations are considered adequately, this thesis demonstrated the potential of the ironHand glove to be used both as assistive and therapeutic device, increasing hand strength directly and improving unsupported hand function after only four week use during ADL.

Anne van Ommeren is a PhD student in the research group Biomechanical Engineering (BW). Her supervisors are prof.dr. J.S. Rietman and prof.dr.ir. P.H. Veltink from the faculty of Engineering Technology (ET).