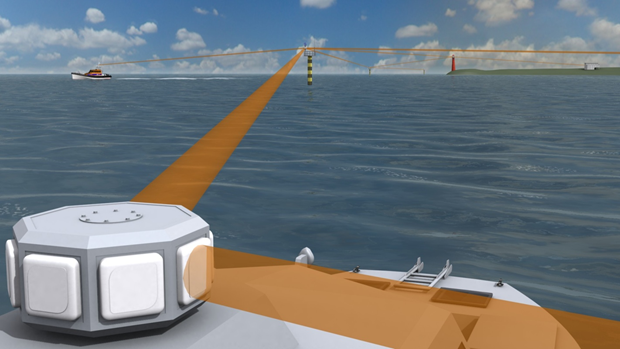 MaritimeManet has been built some years ago at Thales for the first time. This first implementation has also been tested at sea [1]. The node implementation was based on PC Engines Alix/APU embedded computers with Atheros WiFi cards and directional antennas. These have all been integrated into a mechanical frame such that the antennas have the correct orientation w.r.t. each other. Figure 2 illustrates this initial implementation.

Using these frames, a network node for experiments at sea has been configured. In this setup, all single board computers (ALIX, APU) and the MaritimeManet applications running on them can be controlled from a laptop. A full node, covering 360°, consists of three frames (see Figure 3).

Each frame consists of four segments, each covering 30°. Within a frame, the sectors are connected to a switch which provides the connectivity towards the hub. All three frames are connected to another switch that is also connected to the hub (see Figure 3). Also shown is a laptop per node that is connected to the switch. The latter is used to connect to all embedded computers in the system for configuration, logging and debugging purposes.

With two of such nodes, each consisting of at least one (1) frame, a wireless communication link can be setup. Once established, data can be exchanged over this link. For this purpose, the laptop is also connected to the router. A manual for conducting the tests at sea is given in [2]. 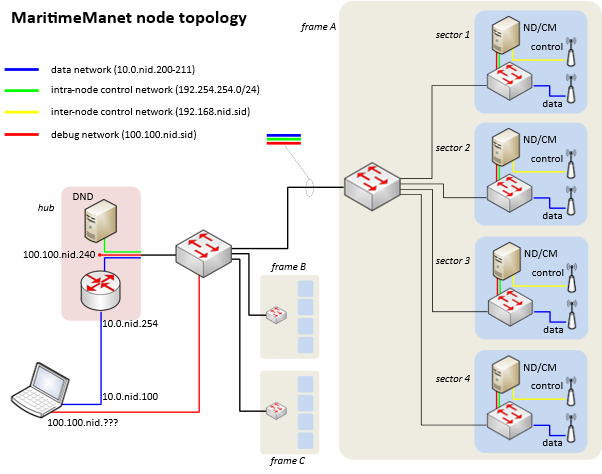 All equipment used for the initial MaritimeManet implementation is available for research and experimentation at the PS group. Since we don’t know the current status of this equipment, and thus whether it can be used for follow-up research on MaritimeManet, this assignment addresses the revitalizing of this wireless infrastructure.