The PhD defence of Jan Kolkmeier will take place (partly) online and can be followed by a live stream.

Jan Kolkmeier is a PhD student in the research group Human Media Interaction. Supervisor is prof.dr. D.K.J. Heylen from the Faculty of Electrical Engineering, Mathematics and Computer Science. 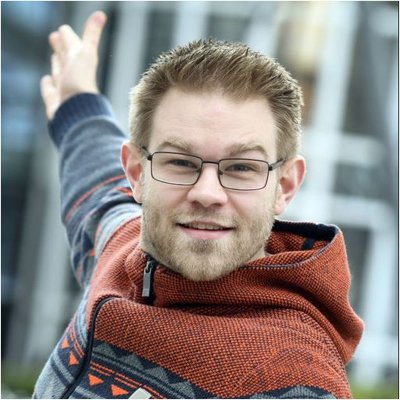 Voice and video calls are part of most people's everyday life. These are examples of technology being used to mediate social interaction between humans. Virtual and augmented reality technologies (VR and AR) play an increasing role in new applications for mediated social interaction. VR and AR can be used to improve upon conventional communication technologies by creating an increased sense of being together in a shared (virtual) space. For interactions where user's physical surroundings are important, mixed reality (MR) can offer further improvements by integrating the physical world into the experience. Another addition can be artificial virtual humans that are controlled by the application, but that can be interacted with using language and gestures. Examples are VR training systems with intelligent virtual humans that allow for practicing skills such as effective negotiation or public speaking. MR telepresence systems allow for people to solve complex problems remotely that previously required physical presence.

Most research was conducted in the form of lab studies, using working prototypes. We have employed qualitative and quantitative methods for evaluation, and a variety of measures across these studies. These measures included physiological responses, how participants perceived the interaction, how they perceived other interlocutors, their feeling of immersion and their perception of social presence with other actors.

The varied findings across these studies are reflected upon through the lens of a conceptual, science-fiction-inspired telepresence system: the SoIC-TV. By developing this concept throughout the thesis, we illustrate how in the future, mediated interaction experience using MR technology might transform beyond what is familiar both from co-located and present technology-mediated interactions.

Jan Kolkmeier is a PhD student in the research group Human Media Interaction. Supervisor is prof.dr. D.K.J. Heylen from the Faculty of Electrical Engineering, Mathematics and Computer Science.