Due to the COVID-19 crisis measures the PhD defence of Bart Cornelissen will take place online (until further notice).

Bart Cornelissen is a PhD student in the research group Robotics and Mechatronics (RAM). His supervisors are prof.dr.ir. C.H. Slump and prof.dr. C.B.L.M. Majoie from the Faculty of Electrical Engineering, Mathematics and Computer Science (EEMCS). 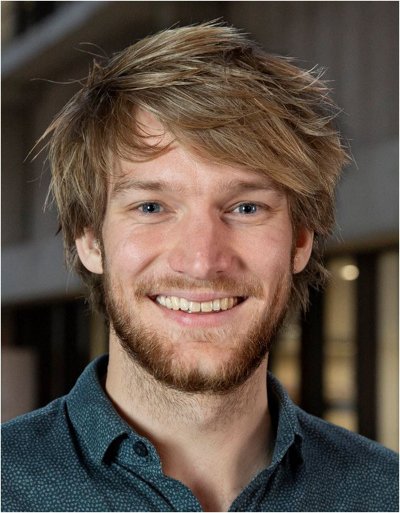 This thesis presents six studies in which we have aimed to improve rupture risk assessment for intracranial aneurysms. We have focused on two techniques that allow assessment of aneurysm wall related characteristics: computational fluid dynamics (CFD) for the assessment of hemodynamics along the wall and imaging of the vessel wall itself using magnetic resonance vessel wall imaging (VWI).

Computational assessment of intra-aneurysmal hemodynamics relies on vascular segmentations, but also on additional boundary conditions such as blood-properties and in- and outflow conditions. Reliable estimates for these parameters are essential for accurate hemodynamic simulations.

In chapter 2 we acquired inflow measurements using 2D phase-contrast MRI (PC-MRI), and we developed a method for automated feature point extraction—e.g. systolic peak, diastolic minimum—for every flow-profile. Based on these feature points, average flow profiles were calculated for each parent artery location in both complete and incomplete CoW-configurations. We show that flow-rates, velocity-magnitudes, and pulsatility indices differ among parent artery locations, but also that anatomical variations of the CoW have significant effects on the flow.

Cross-sectional studies mostly assess differences in hemodynamics between ruptured and unruptured aneurysms, neglecting the fact that aneurysms can grow before rupture or can displace due to a surrounding hematoma after rupture. In Chapter 3, we assess intra-aneurysmal hemodynamics before and after rupture. We demonstrate that important hemodynamic characteristics—flow complexity, stability, and concentration—changed in two-thirds of our population due to either aneurysm growth or displacement. Although our study population is small, these results stress the importance of using accurate aneurysm representations in CFD studies.

The peri-aneurysmal morphology can also change after treatment with stent-assisted coiling. Several studies have suggested that stent-assisted coiling in sidewall aneurysms results in lower recurrence rates, potentially as a result of reduced parent-artery curvatures due to the mechanical properties of neurovascular stents. In Chapter 5, we analyze the effect of neurovascular stents on the peri-aneurysmal geometry and resulting intra-aneurysmal hemodynamics. In our study we showed that the tortuosity of the peri-aneurysmal vasculature decreased with more than 50% in cases where stents were located in the intradural space. For stents located partially in the extradural space, no reduction of the tortuosity was observed. The changes in parent artery orientations resulted in inconsistent intra-aneurysmal hemodynamic changes.

Is It Really The Vessel Wall That Is Visualized In VWI?

The aneurysm wall can be visualized non-invasively using MR-VWI, and is frequently presented as a valuable tool for assessing the stability of the aneurysm wall. In Chapter 6, we analyze different imaging modalities in conjunction with VWI to assess underlying mechanisms that may have contributed to vessel wall enhancement. We assessed CT, DSA, and several MR sequences in a series of patients where VWI was performed because CT imaging could not reveal the rupture site. All ruptured aneurysms showed enhancement in our population, but also half of the unruptured aneurysms enhanced. We identified multiple underlying sources that may have contributed to enhancement: e.g. atherosclerosis, intramural hematoma, and slow flow.

In an in-vivo setup, it is not feasible to isolate the contribution of slow flow to enhancement. Therefore, in Chapter 7, a phantom-setup was designed to quantify the contribution of slow flow to vessel wall enhancement. Several experiments have been executed to assess the effects of preparation pulses, contrast-agent administration, and inflow-rate on pseudo-wall enhancement in VWI. We demonstrated that wall-like signals—originating from slow flow along the wall—were visible in VWI both with and without preparation pulses, although preparation pulses did improve slow-flow suppression. The MR-signal became more apparent after contrast-administration, and higher signal intensities were observed for low inflow-rates. Signal originating from unsuppressed blood may easily be mistaken for aneurysm wall. Therefore, VWI is either not yet suitable for clinical purposes, or should at least be carefully interpreted.

Due to the COVID-19 crisis measures the PhD defence of Bart Cornelissen will take place online (until further notice).