the role of venous return in organ perfusion

Lex van Loon is a PhD student in the research group Biomedical Signals and Systems (BSS). His supervisors are prof.dr.ir. P.H. Veltink from the Faculty of Electrical Engineering, Mathematics and Computer Science and prof.dr. J.G. van der Hoeven from the Radboud University Medical Center. 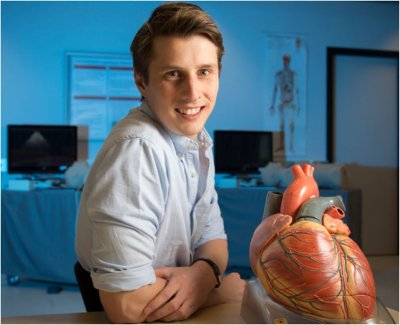 In this thesis, the role of venous return in organ perfusion is elucidated. Using experimental studies, we investigated this relationship in order to improve monitoring-guided therapies aimed at supporting organ function in patients with circulatory shock.

In Chapter 4 and 5 of this thesis we focus on a novel therapeutic strategy for patients with septic shock, namely heart rate control using β-blockers. We took both preclinical and clinical data into consideration regarding the cardiovascular physiological consequences of β-blocker therapy in septic shock. We showed that it is effective to reduce myocardial oxygen consumption when its need outstrips the capacity. However, excessive β-blockade had negative inotropic effects and could put the cardiac output below the threshold that is needed to maintain organ and tissue perfusion. This implies that for safe application of β-blockers with maximum effect, one should focus on; moment of administration, type of β-blocker, resuscitation targets and patient characteristics.

In light of this, the physiological mechanisms that are at play when using β-blockers need to be clarified to improve therapy efficacy. In an animal model with endotoxic shock, we showed negative effects of early administration of esmolol–a selective β-blocker–on right ventricular function. This indicates that clinical diligence and caution are necessary when treating septic shock with esmolol in the acute phase. Also, this emphasizes the significance of adequate right ventricular function assessment.

Another therapy option for patients in septic shock is the use of vasopressors. Of these, norepinephrine is the most widely used. In chapter 6, we investigated whether any vasopressor in particular (norepinephrine, phenylephrine, or vasopressin) holds an advantage when considering effects on both the micro- and macrocirculation. Hampered by the use of low dosages of vasopressors in healthy volunteers, we only saw exerted effects on macrocirculatory parameters compared to placebo. These included a mitigation in the decreased diastolic blood pressure, and a stabilization of systemic vascular resistance and cardiac output. Most importantly, this study underscores that limiting hemodynamic monitoring in critically ill patients to solely blood pressure is insufficient. It neglects the causative physiological processes (pressure, flow and resistance) and its ultimate goal: improving organ perfusion. In the last chapter of this thesis, chapter 7, we evaluated renal autoregulation in an animal model focusing on the relationship between micro- and macrocirculatory parameters. By perturbating the cardiovascular system in the following manners; septic shock, resuscitation, and β-blocker administration. These perturbations had profound effects on the macrocirculation, and was accompanied by pressure-dependency of renal blood flow. However, we showed–using extensive analysis of the renal autoregulation–that this dependency of flow to pressure could be attributed to the low perfusion pressures, rather than a damaged autoregulatory system of the kidneys.

Together, in this thesis we revealed that the role of venous return in organ blood flow depends on pathological conditions, therapeutic interventions, (right) ventricular function, ventilatory settings and autoregulatory mechanisms. Moreover, organ blood flow cannot be assessed by solely looking at the macrocirculation.

Lex van Loon is a PhD student in the research group Biomedical Signals and Systems (BSS). His supervisors are prof.dr.ir. P.H. Veltink from the Faculty of Electrical Engineering, Mathematics and Computer Science and prof.dr. J.G. van der Hoeven from the Radboud University Medical Center.