Niek Moonen is a Phd student in the research group Telecommunication Engineering (ET). His supervisor is prof.dr.ir. F.B.J. Leferink from the faculty of Electrical Engineering, Mathematics & Computer Science. 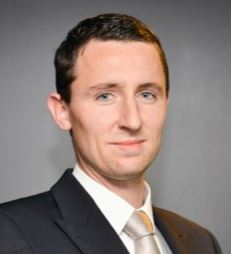 As society and technology are developing, the amount of electrically powered devices is ever increasing. The traditional electrical grid, structured in a hi- erarchical way, is not capable of sustaining the rapid development and imple- mentation of a more dynamical consumer. By incorporating solar panels and wind turbines at farm, businesses and even households the consumer becomes a producer as well. This transforms the conventional grid into a more dynamical and also distributed one. The project of which this thesis was a part of, deals with the integration of renewable energy by applying a new architecture that enables point-to-point power transmission and thus reduces instabilities and improves dynamical behavior. The key objective for the University of Twente (UT) is to ﬁnd the best options for reducing interference, associated with fast switching semiconductors as applied in the novel converter type.

This thesis starts with the development of a theoretical model based on the control signals applied to switching power devices. The model can be used to predict and estimate the conducted Electroagnetic Interference (EMI) gener- ated in switching devices using sinusoidal Pulse Width Modulation (sPWM) waveforms. The model was veriﬁed in a conducted emission measurement. Combining the model with a radiated emission estimation model, gives a de- scription of a noise source that is applied in the newly developed multi-level converter.

For application in multi-level converters a sPWM generator was developed, which with its ﬂexibility is used to perform measurements on Galium-Nitride (GaN) and Silicon-Carbide (SiC) based DC/AC converters, and multilevel con- verters. In case of conducted EMI measurements, the results were used to verify the theoretical model. In case of the magnetic radiated EMI measurements,  a time domain measurement technique was developed that is comparable to using a traditional EMI receiver. The technique reduces measurement times from minutes to several seconds per orientation and placement. In case of large stacked multi-level converters it was deemed necessary to asses the magnetic radiation produced in such a structure. The electric ﬁeld measurements are eventually used together with the developed mathematical model to determine the eﬀective radiation eﬃciency of the system under test.

The developed technique of determining the eﬀective radiation eﬃciency, together with the concept for optimal placement of EMI in fully integrated systems are considered to be part of the main contributions of this thesis and can be seen as Mitigation through EMI placement. Another mitigation tech- nique, which is a fairly classical Electromagnetic Compatibility (EMC) one, consist of implementing a ﬁlter along the propagation path of the disturbance. Part of the research objectives was developing behavioral circuit models based on full wave model and thus optimized ﬁlters implementing nano-crystalline materials.

This thesis contributes with the development of an automated method for back annotating ﬁeld eﬀects into equivalent circuit simulations. Part of this work was the development of Gauss-Newton optimization algorithm that can ﬁt impedance curves to equivalent circuit elements. This was applied to measure- ments and full-wave 3D simulations of relatively simple components like capac- itors, which showed optimal capacitor placement can be investigated through circuit simulations rather then Electro-Magnetic (EM) ﬁeld simulations. Ex- tending the research to more complex structures and components, required the development of a 3D full wave high frequency models. This has been done for a two phased sectionally winded Common Mode Choke (CMC), incorporating complex permeabilities through a dispersion model.

Overall it can be concluded that this thesis has contributed to the de- velopment of the future electrical grid, by investigating components that are attributed to the Multifunctional Multilevel Modular Converter (M3C), which is considered to enable the development of the ’smart grid ’. Much work still needs to be done, from reﬁning and applying the developed measurement tech- niques to larger and fully integrated systems to developing more accurate and faster ﬁtting algorithms for determining equivalent circuit component values. Also the eﬀect of proposed mitigation techniques on various functionalities of the M3C have to be investigated

Niek Moonen is a Phd student in the research group Telecommunication Engineering (ET). His supervisor is prof.dr.ir. F.B.J. Leferink from the faculty of Electrical Engineering, Mathematics & Computer Science.