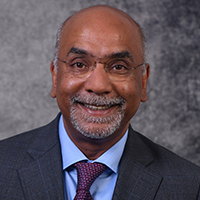 Vinod Subramaniam (1967) is UT’s President of the Executive Board, as of 1 September 2021. Earlier on, he was Rector Magnificus of the Vrije Universiteit Amsterdam, for a period of six years. Vinod already has a long-lasting relation with the University of Twente: until 2013, he was a Professor of Nanobiophysics. From 2012 to 2013, he also was scientific director of UT’s MIRA Institute for Biomedical Technology and Technical Medicine that is today known as TechMed Centre. In his scientific work, he focused on finding causes for neurodegenerative diseases like Alzheimer and Parkinson. For this, he examined the behavior and ‘misfolding’ of proteins in the brain that may be associated with these diseases.

Vinod Subramaniam obtained his Bachelor’s degree in Electrical Engineering at Cornell University, followed by a Master in both Electrical Engineering and Applied Physics at the University of Michigan. He also did his PhD at this university. Before joining the UT in 2004, he was a researcher at the Max Planck Institute for Biophysical Chemistry in Göttingen, and a senior research scientist at AstraZeneca in Loughborough, UK.

In September 2012, he was appointed director at the AMOLF institute (physics of complex functional matter) in Amsterdam, and he was extraordinary Professor of Nanoscale Imaging at Radboud University in Nijmegen. Vinod was appointed Adjunct Professor at the Jawaharlal Nehru Center for Advanced Scientific Research in Bangalore and the Tata Institute of Fundamental Research in Mumbai. He was a guest lecturer and senior fellow at the Zukunftskolleg, the Institute for Advanced Studies of the University of Konstanz in Germany. He is an elected member of the Netherlands Academy of Technology and Innovation (AcTI) and the Royal Holland Society of Sciences and Humanities (Koninklijke Hollandsche Maatschappij der Wetenschappen).

Tom Veldkamp (1963) is UT’s Rector Magnificus since 27 November 2020. He did his PhD at Wageningen University and Research, in 2002 he was appointed as Professor of Land Dynamics at this university. He was Head of the Landscape Centre at Wageningen, and scientific director of the Centre for Geo-Information and Remote Sensing.

In 2010, Tom Veldkamp was appointed as Rector/Dean of the ITC institute – Geo-Information Science and Earth Observation, as the successor of Prof Martien Molenaar. In his years as a Dean, he led the transformation of ITC - from an independent institute to one of UT’s faculties. ITC has a very good reputation across the world, many of its alumni are at prominent positions in their home country. Tom Veldkamp is a sought-after speaker about different aspects of earth sciences. His scientific work was cited over 21,000 times, and he was the promotor/supervisor of dozens of PhD students. He is, among others, the editor-in-chief of ‘Agriculture Ecosystems and Environment’. Veldkamp was the iniator of many public-private partnerships in education and research, across the world. At the University of Twente, he recently was involved in University College Twente ATLAS and in shaping the new crossdisciplinary programme of Spatial Engineering. 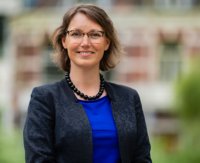 Mrs. Machteld Roos MSc (1975) is Vice-President of the Executive Board per 1 September 2021. Until then, she was Director Research & Operations of the Environmental Sciences Group (ESG) of Wageningen University & Research: this is one of the five large research groups of WUR.

Between 2009 and 2017, Machteld was Chief Financial Officer at NIVEL, the Netherlands Institute for Health Services Research. She was Head of the Project Office of SNS Regio Bank, Head of Business Operations at SEO Economics Research, Programme Manager at the Business School of the University of Amsterdam and Software accountmanager at IBM.

Machteld studied Business Economics at the University of Amsterdam, joined an exchange programme at Waseda University Tokyo. Later on, she did the Nyenrode Supervisory Board Cycle and the IMD Lausanne Leadership programme.