Timon Fabius is a PhD student in the department of Research Methodology, Measurement and Data Analysis (OMD). His supervisor is prof.dr. J.A.M. van der Palen from the faculty of Behavioural, Management and Social sciences (BMS). 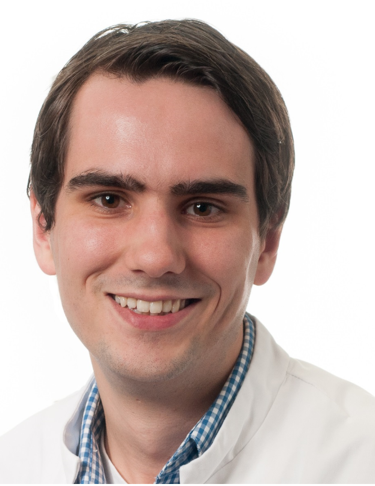 The most important function of the lungs is gas exchange. They are able to do so due to a sophisticated balance between ventilation (allowing inhalation of fresh oxygen rich air and exhalation of carbon dioxide rich air) and perfusion (allowing transportation of oxygen to the organs and vice versa transportation of carbon dioxide). A mismatch between the ventilation and perfusion of the lungs may cause desaturation and hypercapnia. In acute pulmonary embolism (PE) the perfusion of the lungs is affected due to an obstruction of (a part of) the pulmonary vasculature. In obstructive sleep apnea (OSA), ventilation is impaired due to a (partial) obstruction of the upper airway. Both PE and OSA share one other characteristic: in both cases novel diagnostic approaches are desirable.

As PE is a potentially lethal disease, it needs to be ruled out with a high certainty when suspected to be able to discharge the patient safely (or continue workup for some other diagnosis). To do so, a computed tomography pulmonary angiography (CTPA) needs to be performed. However, symptoms of PE (mainly dyspnea and thoracic pain) are non-specific. Consequently, the proportion of CTPA scans that confirm PE is low (approximately 25-30%). This leads to a need for novel tools to exclude PE.

OSA is often accompanied by excessive daytime sleepiness and is associated with an increased risk of cardiovascular related adverse events. The prevalence of OSA is increasing rapidly (mainly due to increasing obesity rates). However, the diagnosis of OSA requires expensive and laborious testing, which leads to a rapid increase in OSA-related health care costs and an increased load on sleep centers. Nevertheless, a substantial proportion of patients referred due to suspected OSA do not suffer from it (up to 30%). Hence, there is a need for cheap, fast, but valid tools that enable exclusion of OSA. The research presented in this thesis focused on the development of novel diagnostic tools using the consequences of ventilation / perfusion mismatches in PE (chapters 2-4) and OSA (chapters 5-7).

In chapter 2 we measured the transfer factors of the lungs for nitric oxide (TLNO) and carbon monoxide (TLCO) in subjects with suspected PE and compared the ratio of these transfer factors to the CTPA results. The transfer factor of the lungs for a certain gas depends on an alveolar-capillary membrane component (e.g. a thickened membrane will result in less diffusion) and a hemodynamic component (e.g. a decrease in pulmonary blood volume will result in less diffusion). Due to a high affinity to bind with hemoglobin, TLNO is virtually independent from the hemodynamic component whereas TLCO is approximately equally dependent from the membrane and hemodynamic component. The ratio of TLNO and TLCO should therefore provide some indication of pulmonary hemodynamics. The results of our study presented in chapter 2 showed no differences in TLNO / TLCO ratio between subjects in whom PE was confirmed and those in whom PE was excluded on CTPA. Moreover, on average, TLNO and TLCO were decreased in subjects with and without PE. This decrease was likely (at least partially) caused by a decreased alveolar volume. This decreased alveolar volume might be the result of suboptimal maximal inhalation caused by thoracic pain, which most subjects with suspected PE experience. These data indicated that the TLNO / TLCO ratio cannot be used to exclude PE.

Given the small number of included subjects (and thus wide confidence intervals), validation of the novel parameter (CapNoPE) was needed. In chapter 4 we performed an external validation of CapNoPE in a dataset of an earlier study on volumetric capnography in PE. This study measured volumetric capnograms in 205 subjects with suspected PE at the emergency department. Diagnosis of PE was obtained using CTPA or proven deep venous thrombosis combined with thoracic symptoms. The results presented in chapter 4 showed that CapNoPE was again significantly decreased in subjects with PE compared to those without. The AUC of the ROC curve for CapNoPE to exclude PE was 0.71 (95%CI 0.64-0.79) and was essentially equal to the AUC of more conventional capnography parameters (with or without the need of PaCO2). Nevertheless, the diagnostic accuracy of the cutoff of ≥ 1.90 Pa.min to exclude PE was too low to use in clinical practice (sensitivity 64.7% (95%CI 52.2%-75.9%), negative predictive value 77.4% (95%CI 68.2%-84.9%) and specificity 59.9% (95%CI 51.1%-68.1%)).

In chapters 5-7 we investigated diagnostic tools for OSA. The diagnosis of OSA relies on the determination of the frequency of apneas and hypopneas during sleep, expressed as the apnea hypopnea index (AHI). According to current guidelines, a hypopnea needs to be accompanied by either an arousal or a substantial desaturation (≥3% or ≥4% depending on the definition used). A full polysomnography (PSG), in which amongst others sleep, flow, respiratory effort, desaturations and arousals can be measured, is considered the gold standard diagnostic method for OSA. However, performing full PSGs is expensive and time consuming. In an uncomplicated case a polygraphy (PG) (in which flow, respiratory effort and desaturations can be measured) is sufficient. Although a PG is substantially simplified compared to PSG it is still associated with substantial costs and warrants manual scoring. We hypothesized that the use of oximetry (possibly combined with a questionnaire) might be a further simplification that can be used to exclude OSA. To support this hypothesis we first investigated the correlation between the AHI and oxygen desaturation index (ODI, number of ≥3% desaturations per hour) in PGs (chapter 5). Specifically, we sought to identify and validate a cutoff for the ODI that could exclude OSA (defined as an AHI ≥ 5). To do so we divided 3413 PGs into a training set and validation set. In the training set an ODI < 5 seemed to best predict an AHI < 5. In the validation set this resulted in a sensitivity of 97.7% (95%CI 96.5% - 98.6%), a negative predictive value of 91.4% (95%CI 87.1% - 94.6%) and a specificity of 97.0% (95%CI 93.8% - 98.8%).

In chapter 7 we investigated whether exhaled breath analysis using an electronic nose could reliably distinguish OSA (defined as an AHI ≥ 15) from non-OSA subjects using 83 sleep center patients suspected of OSA and scheduled for a PG. We hypothesized that the many systemic (pathologic) processes caused by OSA might be reflected in exhaled breath. The results presented in chapter 7 showed that one principal component (PC4) from the exhaled breath data was significantly different in subjects in whom OSA was confirmed compared to those without OSA. However, diagnostic accuracy to distinguish OSA from non-OSA subjects using PC4 was fair at most (cross-validation value 68.7%). Nevertheless, PC4 could predict the AHI as continuous parameter (R2=0.38). The addition of known OSA-related factors in a multivariate model improved the accuracy of the prediction of the AHI (R2=0.53). We were also interested which OSA-related parameter could best predict the exhaled breath profiles. Though hypoxic burden did predict PC4 in univariate analysis (R2=0.11), in a multivariate model only the AHI added significantly to the prediction of PC4 (R2=0.43). This suggests that the frequency of breathing events rather than their duration and severity (expressed as hypoxic burden) influence processes that are reflected in exhaled breath profiles. We concluded that the exhaled breath profiles could not be used to reliably exclude OSA (when OSA is defined as an AHI ≥ 15).

In chapter 8 we discuss the results presented in chapters 2-7 and put them in context. An important topic is the definitions used for PE and OSA and the implications they may have on the data presented in this thesis..

Timon Fabius is a PhD student in the department of Research Methodology, Measurement and Data Analysis (OMD). His supervisor is prof.dr. J.A.M. van der Palen from the faculty of Behavioural, Management and Social sciences (BMS).