Scoring a hat-trick is every footballer's dream. But this is not a feat that is reserved for football players – it is also possible to score a hat-trick at the University of Twente. And the very first person to achieve it was Leen Noordzij, a former student of Mechanical Engineering.

Leen was one of the first cohort of over 200 students who began their studies at what was then the Technische Hogeschool Twente (Twente Technical College) in September 1964. After doing well in his studies – despite his very active student life in his house, Calslaan 9, and the study association Isaac Newton, which he co-founded – Leen went on to graduate in 1968. His first goal, the Baccalaureat (the equivalent of today’s Bachelor’s level) had been scored. The board of the Technische Hogeschool Twente was encouraging graduates to find employment and start their career working for a company. However, things turned out a bit differently for Leen, even though he could have had his pick, with all the offers of employment that he received. But after being asked which subjects he had studied at one interview, Leen was then asked which qualification he had actually achieved. ‘Baccalaureus,’ came the answer. ‘Ah, so you’re actually a glorified HTS graduate’. Without a moment’s thought, Leen decided to return to Technische Hogeschool Twente and study for the title of ingenieur in Mechanical Engineering. He was not alone. In total, only one graduates in his year actually went straight into employment after completing the Baccalaureat. 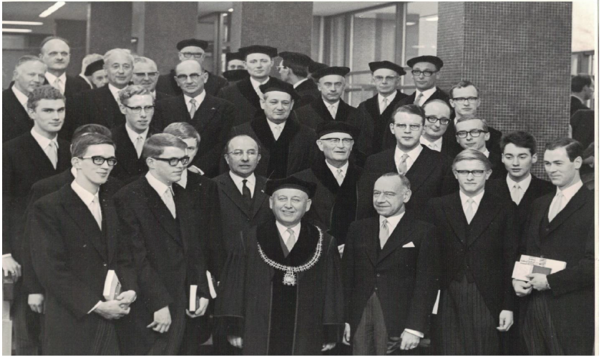 One year later, in 1969, Leen was duly awarded the title of ingenieur (or ‘engineer’, the equivalent of today’s Master’s degree). It was a proud moment, but the ceremony certainly did not go without a hitch and it is worth pausing to tell the story. The conferral of the first true (completely home-grown) Twente ingenieur’s degree at the new Technische Hogeschool Twente was naturally the subject of much anticipation among all the faculty staff. It was a moment to be savoured, and many journalists would also be also attending. And of course, every faculty was eager to provide the very first ingenieur. After a while, there was an unofficial consensus that Twente’s first ‘home-grown engineer’ should come from the faculty of Chemical Engineering, the faculty of the rector at the time, Mr Vlugter. Because of course, it would be wonderful if the rector could address one of his own students and the two of them could enjoy their moment in the spotlight. But the directors had not counted on – you guessed it – Leen Noordzij. Once again, Leen had made quick progress had put a spanner in the works and the director’s plans could not be executed. Leen had finished faster than the other students and registered for graduation three months earlier than the others who were due to graduate.

So, contrary to expectations, the rector (with some reluctance) was unable to present the first ingenieur’s degree to a student in Chemical Engineering, and had to make do with a student in Mechanical Engineering. But rather than acknowledging that Leen was the first person to graduate as an ingenieur from Technische Hogeschool Twente, it was announced that several others had already done so, implying that Leen was not the Technische Hogeschool Twente’s first-ever ingenieur. Technically this was correct, because a few students from Delft had moved to Twente along with their graduation professor in 1964 and had already graduated. But even so, Leen was the first truly home-grown Twente ingenieur. 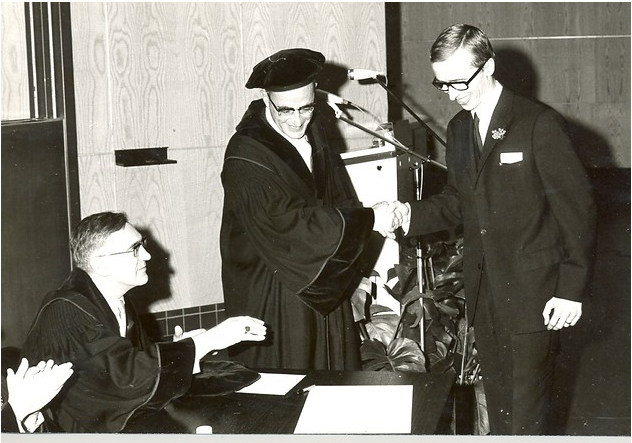 Congratulations for Leen Noordzij with obtaining his ingenieur's degree (1969)

But even this was not enough for Leen, and he decided to continue with his academic career for a while longer. The next challenge for Leen was to achieve his PhD at the Technische Hogeschool Twente. He got himself a job at the Faculty of Physics as a research assistant, and completed his PhD in 1973. And after being the first baccalaureus and the first ingenieur, Leen also became the first person to be awarded a doctorate at Twente. After that, Leen bade farewell to Technische Hogeschool Twente: his work was done, and he had completed his hat-trick.