‘Something to do with building bridges’ and the construction sector: that's what Wing Yan wanted to do from a young age. In 2005, she therefore started studying Civil Engineering at the UT. Seventeen years later, she has gained a great deal of experience but not necessarily in building bridges. She now prefers to explore the limits of civil engineering and see how this can be applied in a broader sense.

When Wing Yan had to choose between Delft University of Technology and the UT in 2005, she soon chose the latter. The fact that Enschede isn’t really a typical old student city was actually a big advantage for her: “What I liked most about Twente was that everyone there was very enterprising. You really had to make your own fun, so everyone was very active too.” And Wing Yan certainly made the most of her time there! The list of things she did alongside her studies is endless: among other things, the symposium, activities and foreign travel committee of the study association ConcepT, a year on the board of the engineering association Kivi and the ESN (Erasmus Student Network), tennis at Ludica and ice hockey at The Slapping Studs, work in the hospitality industry at Mise en Place and of course some lively social events in the city on a regular basis. “That's why I chose to live in the city over living on campus: I didn't want to cycle too far, hahaha.” As part of the DJ crew of Mehrfaut – a group that organised parties in the city – she regularly featured at the pop venue Atak, playing songs on the keytar that the audience then had to guess. 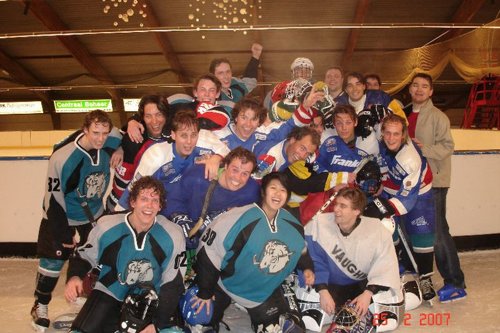 But there was a lot more to experience outside Enschede, and Wing Yan didn’t hesitate to take advantage of these opportunities either. For example, she went on several internships both in and outside Europe. “I went to Japan, Norway and New Zealand. I really made the most of my time at the UT, seizing every opportunity to do something new. I also went to China for the Shanghai World Expo as an additional project during my Master's. Just because I liked the idea.” She is still very happy with the experiences she gained during her study period, mainly abroad: “I did so many fun things. The Batavian race, the Concrete Canoe Race by Concept… But now that I look back on it, I was particularly happy with the people around me who motivated me to go abroad for my studies. I think it has contributed a lot to who I am and my approach to life. And I’m very pleased with the network I have built up, which has become very diverse. That's proving very valuable for my own company now.”

When it was time for Wing Yan to look for a job after graduating in 2012, it turned out to be very difficult due to the financial crisis that was gripping the Netherlands at that point. She spent months looking for a suitable position, also abroad. Fortunately, she eventually encountered an appealing job vacancy at IBM. “I was very keen to work there because I thought they had a very innovative approach. As a result, I applied to both Zurich and Amsterdam. And I was first hired in Amsterdam, where I started as a trainee. I later became an IT consultant for water management projects and eventually progressed to a position in university relations.” A great career for a young professional, but it also had a downside. The work culture and internal pressure she put on herself unfortunately caused Wing Yan to experience a burnout. “I asked myself why this was happening and realised that a lot of other young people around me were also burning out. I had high expectations for myself, and so did they. I didn't want to go back to the corporate world at that point, so I started trying to find out what I really liked.” And this is how her 3310 - School for Millennials was created, originally to give workshops to help prevent young people from suffering a burnout. After five years, the concept has now grown into a creative organisation that offers all kinds of presentations and workshops on themes that young people can relate to, such as fear of failure, work pressure, personal branding and inclusion. Students at the UT have also been introduced to the School for Millennials, for example during Wing Yan's presentation at the Business Days Twente. “It was great to come back in a different role. And next semester, in September, I will also be starting diversity and inclusion workshops for first-year students of the Faculty of Engineering Technology.”

During the coronavirus period, however, Wing Yan realised that she was ready for a new challenge. In addition to running her own business, she is now also active at Delft University of Technology, where she works as a programme coordinator for Artificial Intelligence at the Faculty of Industrial Design. She is regularly asked how she still applies her knowledge of civil engineering. “People often think that I've gone in a completely different direction. But for me, civil engineering means creating an environment that allows people to make better choices. And this is also what I do in my workshops. So even though I’m not working in a traditional civil engineering role, I’m still applying many of the principles.” Although Wing Yan is happy with her current activities, she has big ambitions for the future. With her own museum firmly at number one on the list. “I want to create a space where people can learn things that we didn't learn at school, but should actually know. Take personal finance, for example: how to deal with money. Or how to stay mentally healthy in this world, and how to deal with setbacks and emotions. I hope to do something with this in the future.”

Although she is happy that she now lives and works in Amsterdam, Wing Yan looks back on her student days and the people she met in Twente with satisfaction. She is still friends with her old activity group members, former board and committee mates and other friends she met while going out. The click with other UT students persists to this day. “If you studied in Twente, I think it means you have a particular mindset. Action speaks louder than words, a down-to-earth approach… Recently I was in Spain for a conference and I met a professor from the UvA. But it turned out that she also came from the UT! So, yes, you tend to click right away. You just understand each other better. We are critical and quickly cut to the chase.”