Professionally rebellious: that is how alumnus Rob Buurman describes himself. In his current job as well, but even years ago when he started his Master’s in Philosophy of Science, Technology and Society (PSTS). And you can bet they noticed this at the University of Twente!

In 2006, Rob came to the University of Twente to take the two-year Master’s in PSTS. This might not seem the most obvious choice for an engineer, but Rob had always been more interested in the social aspects of technology than in the technology itself. And another factor played a role too, ‘A friend of mine had advised me to take this programme because he’d always felt I had a really big mouth.’ Luckily, this quality was appreciated at the small but friendly PSTS department. ‘The Master’s in Philosophy of Science involved much more discussion, more critical thinking. Everything that you would usually just assume to be true got tested, broken down and reconstructed. And ultimately, that was a much more instructive process for me, so I was very happy with it.’ This is also reflected in the fact that they spent plenty of time in discussions outside teaching hours. Rob and his student friends could often be found in Café Het Bolwerk, outshining each other intellectually while enjoying a beer or a glass of wine.

In addition to his studies, Rob was also active in the Ideefiks study association, and he was even the association president for a while. While in this post, he was able to shake things up a lot, to the alarm of the university management. ‘A discussion arose about technology for nuclear weapons in Iran. At that time, the Dutch universities had decided they would reject Iranian students as from the next academic year. But I found that really stupid, so I started making calls in political circles to raise the issue. In no time at all, I had found a few politicians who were willing to take part in a debate on this, at the university. Then I thought I’d call the Iranian Ambassador as well! So I did, and after a morning of calls, I called the university management to announce the debate. But just a few days later, the policy was withdrawn again, so the debate wasn’t necessary. Maybe it helped, I don’t know, but it was nice to see how the management struggled with the issue.’

So Rob has felt the obligation to get involved in society ever since his student days. Nonetheless, after graduating, he first started working at his father’s business, in environmental technology. After a while, he moved to Belgium, where he took up a post at a consumer organisation in Brussels. He stayed there for five years, working on issues such as policy on chemical substances and nanotechnology, until the organisation started functioning worse and worse due to poor management. ‘That was when I was scouted by Recycling Network Benelux, which aimed to give a boost to the circular economy in the Netherlands. About 5.5 years ago, I returned to the Netherlands to draw up plans together with the company’s director, such as introducing the deposit on drinks packaging. Now, five years later, we do indeed have a deposit on small plastic bottles, and drinks cans will be next.’ As a professional rebel, Rob is in the right place. No matter whether the issue is sustainability, checks on political power or other social questions: ‘Essentially, what I find enjoyable and important is bringing about transitions. Working in a societal domain with all kinds of authorities and stakeholders, to ensure that something good gets done.’

Most PSTS alumni end up working in science. Rob still drops by at the University of Twente from time to time, to attend Ideefiks career events and to talk about his special career, ‘I really enjoy doing this, and I always hope there’ll be another chance to have a drink and a chat with some students.’ He also still meets up the same way occasionally with old flatmates and friends from his degree programme. So what connects these University of Twente alumni? ‘It’s mostly beer and wine, haha! But when I consider the former students I’m still in contact with, these are almost exclusively entrepreneurial people who set up new initiatives and wish to walk their own path. We all make our own plans.’ 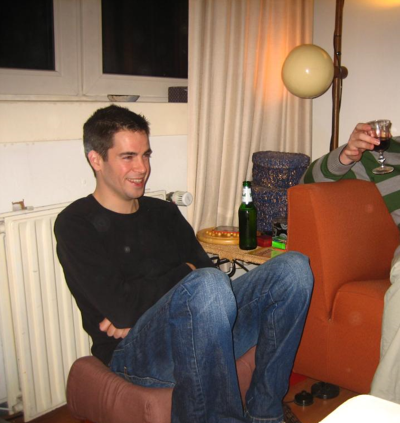