Despite having graduated over 18 years ago, Wiro Kuipers is still somewhat of a fixture on campus. He studied Public Administration here from 1997 to 2003 and currently works at the DesignLab alongside his activities as a business consultant. You could say Kuipers has UT in his blood.

Wiro moved down to Enschede from the far north in his first year. He could hear the jet fighters from Twente Airfield flying overhead every day from his student room on the Witbreuksweg. Before long, he had fully immersed himself in student life; after taking part in an activity group organised by the Taste student association during the orientation event, he immediately decided to become a member. He spent a lot of time socialising with fellow first-year students in the student association during his first year and later joined philosophical debating society Panta Rhei. Soon after, he moved to a debating society house in Twekkelerveld, where he studied and – more importantly – enjoyed his new social life. Public safety studies, Wiro's main area of interest, are not covered until the third year. Inevitably, his academic progress suffered somewhat during the two years before that. 'I was involved in all sorts of student association activities. Tuesday night was usually drinks at the association, and we'd have dinner with the debating society on Wednesday night, or organise some kind of philosophical activity. We'd always go out on Thursdays and play indoor soccer at VV Drienerlo on Friday nights. We used to kick off the new week on Sunday with a drink at the local bar. So yeah, I definitely explored that side of student life a lot.’

In addition to actively enjoying his social life, Wiro was also a motivated student. He organised educational events at the Sirius study association and worked as a student assistant. His personal engagement also showed through during his internship at the Central Information Unit for Soccer Hooliganism and his final project at the Municipality of Enschede, where he developed a new safety protocol in response to the May 2000 fireworks disaster. 'I developed a playbook for disaster and crisis management that was later adopted by the Association of Mayors. The work I did definitely mattered', Wiro explains. He spent some time working at various municipalities in Twente and the Achterhoek region after graduating, but eventually decided to take on a new challenge in the form of an executive MBA. 'That actually inspired me to work in the corporate sector; I wanted to be a business consultant and lead creative sessions. I've been doing that as an independent contractor for about 11 years now, and I try to apply some of the things I enjoyed as a child. I use some really playful methods, in other words. For example, I've been using LEGO's Serious Play method a lot over the past ten years. That was all going well, until the pandemic hit and we had to stop organising physical LEGO sessions. In an attempt to make up for lost revenue, Wiro applied for a position as project manager at the EnschedeLAB, a collaboration between various Enschede-based knowledge institutes where students work on issues affecting the municipality. 'It's really exciting to work with a dream team of young, inquisitive people from all sorts of countries. You get to find out about all the initiatives and ideas out there. It's also interesting to learn what's going on in education and research today, including the developments in my own former field: public administration.’ Wiro recently also got involved in other DesignLab activities, which he plans to continue in the near future. ‘I've become more closely involved with the university.’ 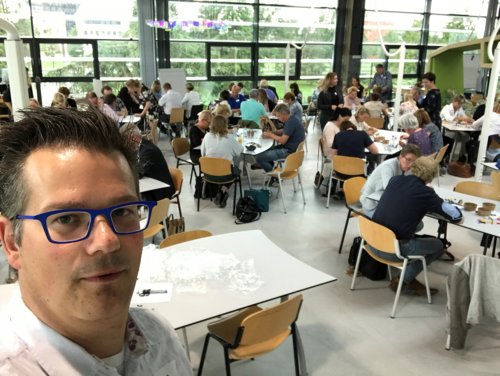 Wiro has plenty of interactions with fellow alumni; during his second year as a parent member of the activity group, he met a particularly lovely first-year student. The two of them have been a couple ever since. He also occasionally meets up with former Taste members from his year and other alumni who stuck around in Enschede after graduation. The group is still close after all those years. Wiro recalls that strong sense of community from his own student days, especially during the period following the fireworks disaster. ‘The entire UT community really came together. People immediately started organising all sorts of initiatives, it was quite remarkable. There was a massive silent march, but we also organised a memorial concert on campus. That was probably one of the most moving moments.’ 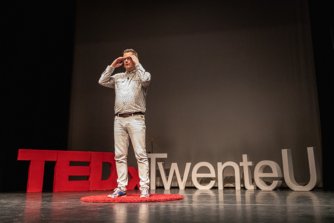