The Antoni van Leeuwenhoek Hospital in Amsterdam (Prof. T. Ruers) and the University of Twente (B. ten Haken) have developed a new localization technique for breast cancer that is based on magnetism.

The procedure can be performed at a very early stage of breast cancer (when the tumor is often still very small and difficult to distinguish from the surrounding healthy tissue) and aims to have the same advantages as radioactive seed localization, but without the disadvantage of radioactivity. The technique uses a small magnetic seed (the MaMaLoc) and a magnetic detector, which functions as a clinical metal detector. The MaMaLoc technique is feasible and safe, and offers a promising non-radioactive alternative for wire-guided localization at the early stages of breast cancer.

Breast cancer is increasingly being detected at an early stage, when tumors are still small. Women with breast cancer often want to receive breast-conserving treatment, in which the healthy breast tissue remains intact. The clinical challenge then is how the surgeon can accurately locate and remove a small spot that is very similar to healthy tissue during the surgery. To be able to do so, localization techniques are of crucial importance. 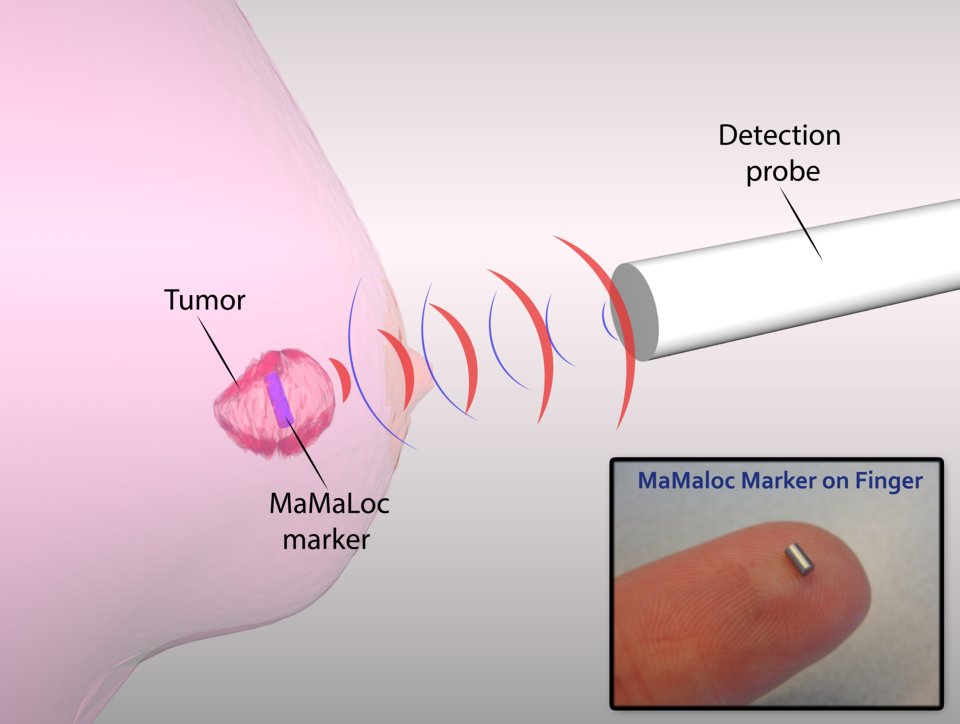 Traditionally, wire-guide localization is used for this purpose. Just before the surgery, the radiologist inserts a metal wire with an anchored tip into the tumor. The wire protrudes from the breast. During the surgery, the surgeon uses this wire as a guide to remove the tissue surrounding the tip of the wire. The wire-guided technique is difficult to learn, painful for the patient and a logistical challenge for the hospital, as the time between placement of the wire and surgery must be as short as possible.

An alternative technique is radioactive seed localization. Instead of a metal wire, a small iodine seed, the size of a grain of rice is inserted into the tumor. During surgery, the surgeon can detect this seed using a radioactive detector, thereby receiving continuous feedback as to whether he or she is still on the right track. This technique has advantages over the wire-guided technique, but is only used sparingly because the procedures for the implementation and use of radioactive seeds are complex and costly for a lot of hospitals.

"As part of the pilot study (published in the journal: The Breast) we first tested the technique on fifteen test subjects, paying particular attention to the safety and feasibility of the technique," says UT-scientist ten Haken. “The radiologist placed both the MaMaLoc and the iodine seed in the tumor up to thirty days prior to the surgery. With five test subjects, we performed an extra mammography immediately after the placement and just before the surgery to make sure that the MaMaLoc remained in place (does not migrate). During surgery, we asked the surgeon to check whether he could detect the MaMaLoc through the skin using the magnetic detector before making the first incision (cut). This was necessary because if the marker can be detected through the skin, that should also be possible at a later stage during surgery. We asked the radiologist and the surgeon to rate their satisfaction with the technique.”

Both surgeons and radiologists were satisfied with the technique during these fifteen procedures and saw the advantages. The MaMaLoc was detectable through the skin in all fifteen cases. There were also some relative disadvantages: the marker does not work well with MRI-imaging yet and the surgeon has to use slightly different instrumentation during surgery.

UT-graduate student Bram Schermers (technical physician MaMaLoc at the Antoni van Leeuwenhoek Hospital) was recently elected as the winner of the Amsterdam Science & Innovation Award 2016 out of 65 entries by Amsterdam knowledge and research institutes.