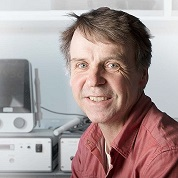 Bennie ten Haken graduated as Msc. in Applied Physics at the University of Twente in 1990. He completed his PhD thesis on Strain Effects On The Critical Properties Of High-Field Superconductors in 1994. After a 3 year Post-Doc position he became Assistant professor (UD) in the Low-temperature group in the Faculty of Applied Physics at the UT. From 1999 to 2004 he was group leader for the Large scale Superconductivity section in this Low Temperature group. In 2002/2003 he spent a research visit for 9 months as visiting scientist at the Physics department of the University of California in Berkeley to work on Low-field MRI in the Clarke/Pines group on Low-field MRI with SQUID detection. In the period 2005-2010 he switched his research to the field of Biomedical Technology in combination with Technical Medicine. In 2011 he received the degree Associate Professor (UHD) and moved to the MIRA-MD&I chair to build a new research group on Magnetic Detection.

Dr. ten Haken is an experienced researcher in the field of superconducting materials and applications including MRI. In his first research period on high-current applications for superconductivity he realized an output of more than 100 articles in refereed journals, 2 successful patent applications and multiple European and Nationally funded projects. His present research is focusing on magnetic methods for medical imaging, After his switch in 2011 this lead to new collection of articles on Neural modelling, MRI and Magnetic Nano-Particles. The new development on magnetic particle detection in patients, with the Differential Magnetometer (DiffMag) technique, lead immediately to a new patent application in 2012.

In the past decade ten Haken spent a larger part of his academic time on the development of a novel Dutch course on Technical Medicine (TM). He is presently developing and maintaining the MRI line in the Biomedical Engineering course (Bacc & MSc) and in the novel and worldwide unique course in Technical Medicine (Bacc & MSc). In the framework of this TM course an active education and research network is developed that embeds all 8 Academic Medical Centres and most of the larger teaching hospitals in the Netherlands. Around 60 students.
I a year are taking part in this 3 yr. MSc course, including 2 years of clinical internships in this national medical network.