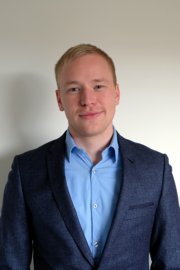 Lennert Molenaar was born in Leiden, the Netherlands, in 1990. After graduating high school in 2008 he started to study Medicine at the University of Leiden, in 2009 he switched to Technical Medicine at the University of Twente. He obtained his master’s degree (Medical Imaging & Intervention) in 2017. After four internships at three different hospitals and one mechatronics company, he graduated at the surgery department of Meander Medical hospital at Amersfoort under supervision of prof. dr. Ivo AMJ Broeders. Here he compared an active robotic laparoscopic camera holder with human steering. After graduation he started a PhD position at MD&I.

During his PhD Lennert is going to realize the clinical implementation of a newly developed laparoscopic magnetic probe for sentinel lymph node detection. This will be achieved by executing multiple trials; testing of different magnetic particles necessary for the lymph node detection, evaluating the depth penetration of the newly developed probe and human safety and efficacy tests.