For proper functioning, the human brain depends critically on the constant supply of fresh blood containing oxygen and sugars. The energy needed for the signaling processes of the neurons is provided by the oxygen and glucose in the blood.

An insufficient supply of energy to the brain (after a stroke, for example) will hamper the workings of the synapses and the molecular ion-pumps of neurons, which in turn will alter their signaling properties. This can cause (parts of) the brain to show changes in activity, both in amplitude and frequencies, which can be visible in, for example, EEG, MEG or fMRI.

This work is performed in collaboration with the Clinical Neurophysiology group and is part of the PID-ON project “ViP-Brain Network”. In this project we want to investigate the possibilities for new diagnostic methods for pathologies related to ischemia. Below is a summary of the different physiological aspects that play a role in ischemia and hypoxia.

When neurons and their supporting glial cells do not receive enough energy, the neuronal unit is not able to maintain the ionic gradients over the cell membrane that are necessary to enable spiking. When the ion concentrations change, the functioning of the neuron is altered. This changes its excitability for example. 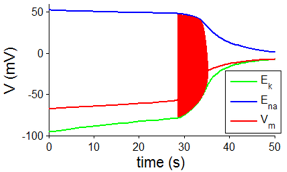 Simulation of the membrane voltage of a Hodgkin-Huxley neuron after cessation of blood flow. The cell slowly depolarizes during the first 28 s, due to leak currents and then starts spiking when the spiking threshold is reached, causing a sudden rise in membrane voltage. The mechanisms for the experimentally often encountered period of anoxic hyperpolarization are not incorporated in this simple model.

Functioning synapses are essential for the communication between neurons. Besides being dependent on energy, they are also very vulnerable and can become permanently damaged from anoxia within several minutes of time. We are interested in the metabolic needs of the synapses and the effect of hypoxia on their functioning. 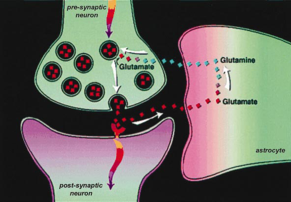 Cartoon of the recycling of neurotransmitter by an astrocyte (from Shulman, Hyder, Rothman 2002).

From the dynamics of single neurons and synapses, the behavior of a network of neurons can be calculated. Simulations containing many neurons are common and readily available. However, most simulations assume that homeostasis is maintained and new simulations of neural networks suffering from hypoxia are needed.

The transport of oxygen to the brain tissue from the blood is realized purely by diffusion from the blood vessels. We are interested in obtaining realistic oxygen distributions in tissue under different circumstances. Interesting is the heterogeneity of the cortex in both cell types and microvasculature, possibly causing some cell types to receive more energy than others when the oxygen supply partially fails.