For most patients with primary cancer without known metastases, chemotherapy combined with a radical resection of the primary tumour and surrounding lymph nodes (LNs) is standard care. However, resection of all LNs is highly invasive and for a moderate to high percentage of the patients unnecessary (varying per pathology), since no metastases are present. During sentinel lymph node biopsy (SLNB) only the primary tumour draining lymph nodes are removed, decreasing patient morbidity. This procedure is standard care for breast cancer and melanoma, SLNB for other pathologies is still being researched. A trend that is observed in the medical world is the increased use of minimal invasive interventions, especially for abdominal surgery. This will in many situations overrule open surgery, which leads to decreased burden to the patient. For this reason, it is important to perform an laparoscopic SLNB procedure.

The use of magnetic nanoparticles has many advantages over nuclear tracers, which is the current standard to detect SLNs. The principle that we use to achieve SLN detection is differential magnetometry (DiffMag). In DiffMag the nonlinear magnetization characteristics of superparamagnetic iron oxide nanoparticles are exploited. The main drawback of the current handheld DiffMag probe is limited depth sensitivity and a probe unfit for laparoscopic surgery. In order to alleviate this we propose a set-up in which the excitation and detection coils are mechanically separated. As a result, the size of the excitation coil can be increased and placed underneath the body. The detection probe can be made much thinner, so it will fit a standard laparoscopic trocar. Our goal is to place the detector inside laparoscopic equipment in order to provide a minimal invasive way to detect SLNs.

For more information on this project you can contact: 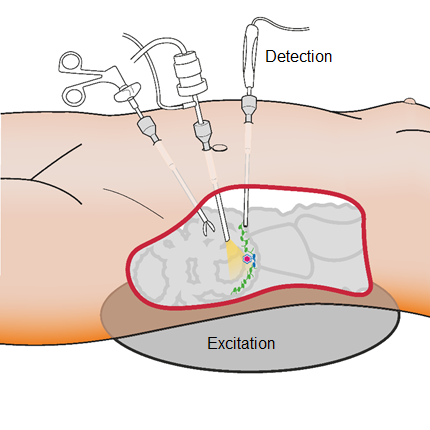