The assembly of microparticle arrays received considerable interest from both science and industry in the last decades, with applications in various fields such as photonic films, surface coatings.[1;2]

This project builds on our recent finding that silica or polystyrene spatially segregate on fluorocarbon-coated parts on silicon and borosilicate glass wafers when manually rubbed with PDMS sheets past these substrates. Kelvin probe force microscopy (KPFM) scans have shown that due to the tribocharging mechanism, the microspheres and substrates acquire opposite charges, inducing an electrostatic attraction.[3] Preliminary rubbing experiments performed with binary mixtures comprising both silica and polystyrene microspheres show that these particles form densely packed monolayers on the fluorocarbon patterns on borosilicate wafers (Figure 1). 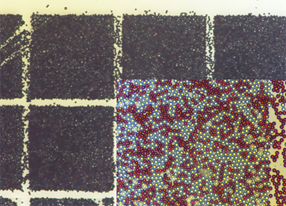 Figure 1: The distribution of 10 µm silica (white) and polystyrene particles (red) on fluorocarbon patterns (squares) on a borosilicate wafer. The rubbing experiment was performed under zero humidity conditions

This assignment focuses on studying the directed assembly of binary mixtures comprising combinations of silica, polystyrene or PMMA microspheres on different coated substrates in more detail. Particular attention will be paid to the self-organisation and ordering of the microspheres when rubbed or agitated on these substrates under different humidity conditions. In addition, the effect of different substrate coatings on the ordering will be investigated. To understand the ordering of the microspheres, KPFM will be employed to measure the charge distribution on the microspheres as well as the underlying substrates. To this end, this project will be performed in collaboration with Kai Sotthewes (PIN group).