Research on the design and fabrication of new hybrid and inorganic nanomaterials via chemical synthesis, with emphasis on functional thin films, micropatterns and low-dimensional nanostructures such as nanofibers and 2D nanosheets, for applications in the areas of energy harvesting and storage, nanoelectronics and sensing.

Colloidal solutions of complex clusters, low dimensional nanostructures such as dispersed nanowires or nanosheets, or inorganic oligomers, are synthesized and then typically used as ‘building blocks’ for the bottom-up synthesis of oxide and hybrid nanomaterials. 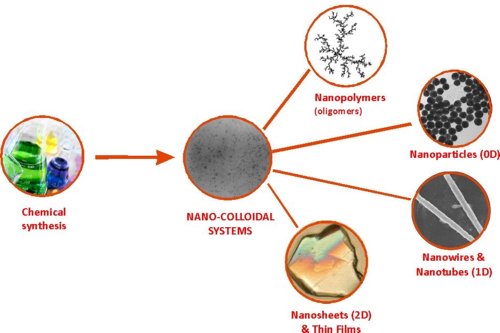 These nanosheets are prepared from a layered oxide crystal by a chemical exfoliation process. The can have lateral sizes up to ~50 mm depending on composition, and since they are so thin they are flexible and can be bent. They can then be assembled into ultrathin films using a modified Langmuir-Blodgett method. We have explored the use of such films as seed layers to induce crystallization and crystallographic orientation of functional perovskite-type oxide thin films grown on top of them. The example illustrated below shows a conductive, ferromagnetic strontium ruthenate (SrRuO3) thin film (yellow) grown on titanate (TiO2) nanosheets (blue, left) and on calcium niobate (Ca2Nb3O10) nanosheets (red, right). Depending on the 2D lattice parameters of the nanosheets, the SrRuO3 film shows dominant (110) orientation (on TiO2 nanosheets) or (001) orientation (on Ca2Nb3O10).

Schematic illustration depicting the use of 2D nanosheets as seed layers for the crystallization and controlled crystallographic orientation of epitaxial oxide films.

The properties of an SrRuO3 film depends on its orientation. We have used this seeding method to control the properties of ferromagnetic and ferroelectric films, but they can also be employed to improve the crystallinity of photovoltaic and semiconductive layers. We have experience with developing a wide range of oxide nanosheets, and can employ the Langmuir-Blodgett or inkjet printing method for monolayer films, multilayer films, and (micro)patterned functional structures.

While ceramics are typically known for being hard and brittle materials, they become flexible when their dimensions are downscaled in one or two principal directions. We have been developing ceramic nanofibers of various compositions. The fibers are made using the electrospinning technique and our expertise is to formulate suitable chemical solutions for spinning. We can independently control the final fiber composition, architecture (dense or core-shell), diameter, porosity, and surface roughness. 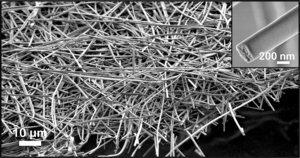 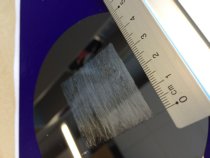 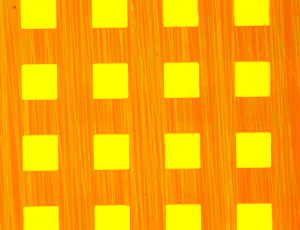 We have also been working on relatively cheap and upscalable methods to pattern functional inorganic materials on micrometer and nanometer scale. Such patterns could find application in electronics, sensors, and energy materials technologies (solar cells, fuel cells, etc.). We use soft-lithographic techniques for this purpose and can make single and multiple layer patterns with resolutions down to 100 nm on inch scale.

All soft lithography techniques require an elastomeric mould or stamp that is patterned with a relief structure on its surface. One of the steps in the patterning process involves bringing the elastomer into conformal contact with a substrate, and be used as stamp or mould. The most popular and widely used elastomeric material is polydimethylsiloxane (PDMS), a rubber-like material with a low surface energy.

A couple of examples of micro and nanopatterned structures are shown the figure below. 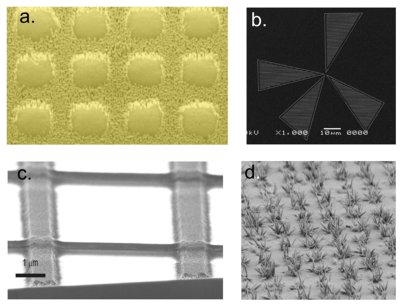