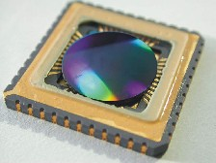 The basic principle of rechargeable lithium batteries: the “lithium intercalation” of the positive electrode has been studied to determine the key aspects of this process.

The active material is a LiCoO2 ceramic layer. Two different plasma deposition techniques have been applied to grow well-defined LiCoO2 films on silicon and polished stainless steel substrates. These are: Pulsed Laser Deposition (PLD) and RF-sputtering. These films obtain a layered, polycrystalline structure (R-3m) after an annealing treatment (600°C for 30min). The orientation of the two-dimensional host lattice towards the substrate depends on the deposition rate. A (pulsed) high deposition rate leads to a so-called c-axis orientation, as observed here in the case of the PLD-film, while a continuous low deposition rate results in an a-axis oriented film, as observed here for the RF-films.

Finally a ceramic micro-battery has been constructed on the bases of the a-axis oriented LiCoO2 films on silicon substrates. This prototype shows the feasibility of on-chip power (backup) for integrated circuits.