In process industry hydrogen is a very important feedstock for a large number of processes like the production of ammonia (fertiliser), various hydrogenation reactions and electricity production in gasturbines. In future hydrogen will play an even more important role because of the rise of the "hydrogen based society". This becomes already visible in the fuel cell car recently taken in development. The classical way to produce hydrogen is steam reforming of hydrocarbons, mostly methane. The overall steam reforming reaction is given by:

For thermodynamical reasons equilibrium conversion reaches 90% only at a temperature as large as 1000ºC. This makes the process energetically very unfavourable. By removing the produced hydrogen selectively from the reaction zone (for example by using hydrogen selective membranes), the same conversion can be attained at 600-700ºC. When this can be realised environmental benefits are evident. 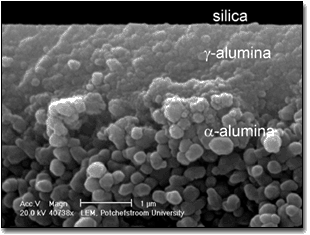 Besides the environmental effects, also the cost of the hydrogen produced in such a membrane reactor is of main importance. Therefore, in chapter 2 of this thesis an analysis is provided which describes not only the requirements for the membrane, but also for the complete membrane reactor process (process technology) to make such a reactor economically feasible. In this chapter membrane-related quantities like flux, selectivity and stability (thermal, chemical and mechanical) were treated besides aspects like sealing technology (and the costs thereof), the catalyst used, operating temperature, etc. The conclusion was that it is virtually impossible to make a statement beforehand on economical grounds whether a membrane reactor can be constructed in a cost-effective way. Small changes in the operating temperature of the reactor may have significant consequences for a membrane reactor being economically feasible or not.

It was tried to make membranes using the specifications obtained in the technical economic evaluation. Of main importance besides the economic considerations was of course the stability of the membrane under steam reforming conditions. To test the stability of the prepared membranes, so-called Simulated Ambient Steam Reforming (SASRA) conditions were used. These are: 30 bar total gas pressure with methane to steam ratio of 1:3 at a temperature of 600ºC. The main requirement was that a developed microporous membrane should withstand these conditions for at least 100 hours without any signs of degradation.

To realise this, first very homogeneous α-Al2O3 supports were prepared by using colloidal techniques. Colloidal filtration was used for the preparation of flat supports, while a centrifugal casting technique was developed to prepare highly smooth and round tubular supports.

On these supports mesoporous γ-Al2O3 layers were dipcoated. These layers were, however, not stable to above-mentioned SASRA conditions. After a SASRA-treatment these layers showed serious delamination from the support. The application of a phosphorous containing layer in between the support and the mesoporous layer showed to solve the problem of delamination. The phosphate groups of this layer were found to behave as a sort of adhesive between the support and the mesoporous γ-Al2O3 layer. The formed bond showed to be stable enough to withstand the SASRA conditions. To minimise pore-growth of the γ-Al2O3 layer during SASRA-treatment, the γ-Al2O3 was doped with lanthanum and sintered at 1000ºC. The resulting mesoporous γ-Al2O3 membrane had a pores with a Kelvin radius of about 6 nm and was completely resistant towards the SASRA conditions.

Unfortunately due to time limitations, there was no time to coat these steam stable mesoporous membranes with a microporous silica toplayer. Microporous (doped) silica membranes have, however, been applied on conventional mesoporous γ-Al2O3 membranes which were not stable under SASRA conditions. On these membranes permeance measurements have been performed which showed that these membranes could be prepared with a very high selectivity under cleanroom conditions. Stability measurements on (doped) silica bulk material sintered at a high temperature (600-800ºC) showed no change in the specific surface area during SASRA treatment. This is an indication that it should be possible to prepare a silica membrane that shows complete stability towards SASRA conditions.

On the basis of the results obtained in the project in chapter 8 a concept proposal is provided for the use of the developed membranes for the thermal dehydrogenation of H2S in a membrane reactor.