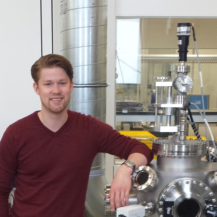 PLD has been established in recent years as a very versatile deposition technique for complex materials, including complex oxides. PLD utilizes the transient particle flows of a laser-induced plasma to achieve a fully controlled (also crystalline) growth of thin films. 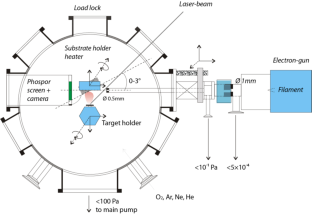 Figure 1: A typical PLD-RHEED setup consisting of a UHV chamber and an electron gun setup.

Considering the growth process at the substrate surface, involving plasma substrate interaction, particle diffusion, nucleation and the formation of perovskite structured crystal lattices, knowledge is limited. Only the final results of these processes, the grown film, is characterised. Clearly, laser parameters influence the plasma, the kinetic growth characteristics and stoichiometry of the film. Therefore, the stoichiometry of the plasma and the grown film are obviously related, but the relation between plasma composition, and surface diffusion and ‘sticking’ of particles, is unclear. The knowledge of the influence of various PLD growth parameters, such as laser intensity, pressure and temperature is of empirical nature.

The first part of this research focusses on understanding the influence of laser fluency on plasma composition and thin film growth of perovskite oxides. For this purpose, different material systems are selected which show significant influence of the fluency on their stoichiometry, which in turn is an important parameter for its properties, i.e. electrical transport. 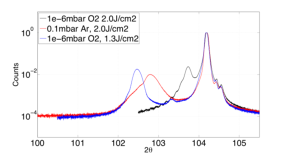 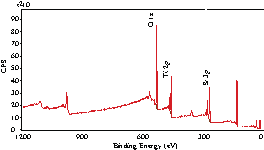 Figure 2/3: On the left XRD measurements are shown which show a clear film peak shift depending on fluency. A typical XPS spectrum of an STO film is shown on the right.

First growth studies focusses on SrTiO3 as material system, a perovskite structured complex oxide material. With PLD epitaxial SrTiO3 films are grown on SrTiO3 substrates at various laser parameter settings and background pressures, were these parameters have an influence on the film stoichiometry (Ohnishi, APL 87, 241919, (2005)).

In future work this knowledge regarding the influence of laser parameters on growth will be used in the collaboration with the Laser Physics and Nonlinear Optics Group at the University of Twente, were a new PLD setup will incorporate plasma spectroscopy, Laser Induced Fluoresence (LIF), Adsorption Spectroscopy (AS) and Doppler shift measurements, to obtain spatial and elemental information about the plasma.