The research described in this thesis deals with the synthesis and properties of ceramic oxide membrane materials. Since most of the currently available inorganic membranes with required separation properties have limited reliability and long-term stability, membranes made of new oxide materials that can improve their performance are developed. Anatase and amorphous titania were chosen as mesoporous and microporous material for membrane development, respectively. The relationship between synthesis conditions and properties of the obtained materials could be understood by applying the theory of sol-gel chemistry of transition-metal alkoxides. The developed membrane systems containing Al2O3, SiO2 and TiO2 were evaluated regarding their potential for application in gas separation, nanofiltration and pervaporation.

Mesoporous titania membrane. Crack-free anatase-based titania layers with an average pore size of 7 nm can be obtained with a reproducibility of around 50%. On the basis of the hypothesis that cracking is caused by stresses that developed due to (partial) phase transformation at the calcination temperature and the low elasticity of the layers due to the low binder content, doping was employed to increase the reproducibility. Zirconia is a suitable dopant that not only retards the phase transformation of anatase into rutile to temperatures above 700 °C, but also leads to a material with higher porosity, smaller pore sizes, higher degrees of pore connectivities and larger internal surface areas. These zirconia-doped titania crack-free layers can be made with a reproducibility of nearly 100%.

Microporous titania membrane. Highly reproducible defect-free amorphous microporous titania layers with a mean pore size of less than 0.9 nm can be obtained on both mesoporous γ-alumina and titania/zirconia coated substrates. The upper limit of thermal stability of the amorphous phase in thin layer form is around 425 °C. Calcination at higher temperatures leads to crystallization into anatase, and layer cracking. The material is chemically stable in the pH range from 2 to 13. 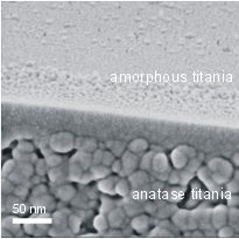 Application. The development of mesoporous and microporous titania membranes introduces novel stacked membrane systems α-Al2O3 - TiO2 - SiO2 and α-Al2O3 - TiO2 - TiO2, along with the previously developed α-Al2O3 - γ-Al2O3 - SiO2, for the various membrane technology applications. Since the chemical stability of mesoporous anatase and microporous amorphous titania membranes is higher than those of γ-alumina and silica membranes, the application field of ceramic membranes can be expanded towards new processes that involve more corrosive chemicals. The mesoporous titania membrane can be applied in ultrafiltration, and possibly in nanofiltration. Furthermore, since the γ-alumina - silica membrane system already proved successful in gas separation and pervaporation, the system α-Al2O3 - TiO2 - SiO2 has potential in the same processes, with the additional advantage of higher chemical stability at low pH. The microporous titania membrane (system α-Al2O3 - TiO2 - TiO2) with pore sizes in the higher microporous range can be applied in pervaporation and in nanofiltration. Applied in pervaporation, the system
γ-alumina/silica shows the highest separation factors, followed by the systems titania/silica, and titania/titania. However, the chemical stability increases in the same order. Therefore, the choice of membrane and support material strongly depends of the requirements of the specific application.

Pervaporation process. The adsorption-diffusion model and Maxwell-Stefan theory are applied in explaining separation mechanism and influence of process parameters on the pervaporation of selected binary liquids. The microporous titania membrane is found to be non-selective for small molecules (e.g. lower alcohols), because its relatively large micropores exclude molecular sieving as a separation mechanism. However, very high separation factors and reasonable fluxes were measured for ethylene glycol/water mixtures with not more than 5 wt% of water. The high separation factors for water obtained with ethylene glycol/water mixtures under water-lean conditions indicate a selective mode of separation that is based on a dynamically induced molecular sieving mechanism. It is shown that the membrane became selective under dynamic conditions, despite the fact that the pores are insufficiently small for size-selective separation. This principle may be applied in other dewatering processes, especially where it involves organic compounds that can strongly adsorb on the pore surface. In general, these would be molecules with a reasonable molecular size, a large dipole moment and/or the possibility to form one or more hydrogen bonds, e.g., ethylene glycol, dimethyl formamide, dimethyl sulfoxide, etc.

Microporous silica membranes can be used for separation of water from a wide range of alcohols. Separation occurs primarily due to a molecular sieving effect, however the chemical nature of the separating layer also plays a pronounced role. The system α-Al2O3 - (anatase)TiO2 - SiO2 has an improved chemical stability in comparison with the one containing γ-Al2O3 instead of anatase TiO2 and it can be applied in dewatering of alcohols. However, the choice of an intermediate layer material may also play a crucial role in the separation when the permeants’ molecular sizes do not exceed the maximum pore size of the membrane (e.g. for separation of ethanol/water mixtures). The use of γ-alumina as intermediate layer increases the hydrophilicity of the system, promoting water adsorption in accordance with the adsorption-diffusion permeation model.