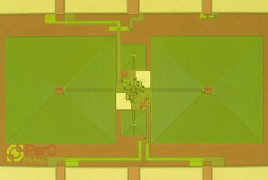 We are developing low-Tc SQUID amplifiers and -systems which can be utilized for high-precision measurements of electrical currents or any quantity that can be transformed into it. Possible fields of application are for example current amplification and detection, displacement sensors for detection of gravitational waves or an utilization in STM- and AFM-systems or the readout of thermal detectors for astronomy (TES, STJ).

Low-Tc dc-SQUIDs have proven to be able to measure magnetic fields with an unrivaled sensitivity. By integrating a coil on the SQUID, one can transform the magnetometer into an amplifier. The main differences to the conventional SQUID magnetometers are:

1.The integrated coils can influence the performance of such sensors hardly predictable way.

2.The SQUID is also interacting with the connected load and thus, depending on the application, back-action noise and other mutual interaction between amplifier and object of observation have to be taken care of.

Currently we concentrate on using the SQUID as an amplifier with the best possible sensitivity reachable by optimizing design and cooling behavior at sub-kelvin bath temperatures. The designated application, the readout of the resonant mass gravitational wave antenna MiniGRAIL, further asks for special design-criteria important for reading out a load with a high quality-factor: low back-action, good coupling factor and a possible stable operation in flux-locked loop. The designs are fabricated at IPHT Jena/Germany.

Using numerical simulations on models including parasitic elements introduced by the integrated input coils, we are able to predict the behavior in a good way. The figure below depicts the simulated and the measured Φ-V-characteristics of one of our sensors operating at a temperature of 600mK. Most features in the characteristics can be explained, including a hysteresis originating from resonances in the integrated coils. [1,2]

Furthermore, additive noise of the devices can be extracted from the simulations. The picture below shows the temperature-dependent measurement of the sensitivity of one of our designs as well as a comparison to the simulation on the extracted model of the sensor. [1]

Cooling behavior of the sensors

Another important issue under investigation is the thermal behavior of the sensing device. The sensitivity of practical dc-SQUIDs cooled down to temperatures below 1 K is often limited by the hot-electron effect. So-called cooling fins, electrically negligible extensions of the volume of the resistor, can be attached to weaken this effect. We characterized different configurations of resistors with cooling fins by dissipating power and measuring the Johnson noise to determine the effective electron temperature, which directly influences the sensitivity of our sensors. We could reproduce our measurement data by performing FEM calculations based on the theory of the hot electron effect and the thermal transport via the electrons within the geometry of resistor and cooling fin. This turns out to be a powerful tool to predict and optimize the minimum reachable temperature and thus the optimum reachable sensitivity.

Besides conventional dc-SQUIDs, our group also works on so-called 2nd generation SQUIDs, based on the (Double-) Relaxation Oscillation SQUID, (D-)ROS, device family. Those sensors can for example be used as magnetometers or current amplifiers, to match low noise signal sources to the readout via room temperature electronics [4] or for replacing the usual flux-locked loop using an on-chip feedback technique [3].