ElectroMechanical Microcomponents for Precision Applications (EMMA) is a European project for the development of seven types of capacitive MEMS. The University of Twente developed a low-cost sensor to detect transmitted power through a line without having to consume the power itself for detection, contrary to common power sensing, which consumes the complete signal. The new technology is highly integrable with other electronics.

Long-term stability and reliability however is challenged by parasitic charging of the dielectric parts. This research aims to draw a clearer picture of the underlying physical phenomena by two parallel research lines. The first studies on mesoscopic (test structure) level the global properties of charge trapping. 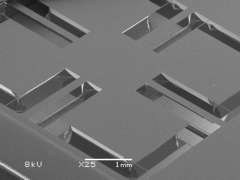 The second aims at studying diffusion processes of charges by conducting AFM.

In both, temperature is an important research parameter.

A very interesting and very unexplored part is the integration of superconducting electronics in MEMS technology. Already a few test structures have been fabricated, like this SQUID-coil combined with a capacitive bridge: 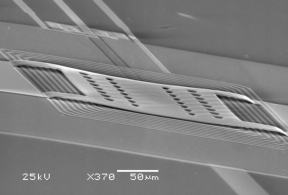 Apart from device-level research on trapped charges, effort has been put into fundamental research as well. Experiments have been proposed to probe localized parasitic charges with Conducting Atomic Force Microscopy (C-AFM), an existing but relatively unexplored technique.

For calculations of the tip-charge interaction a model has been developed that overturns existing ones from literature. It predicts interaction strengths that are in excellent agreement with Finite Element simulations and experiments. 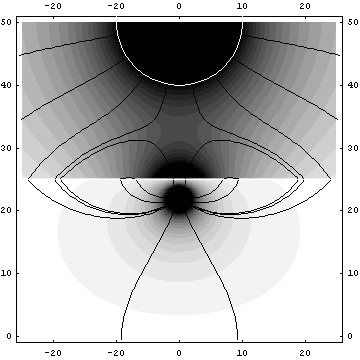 Potential contours and electric field lines in case of the tip, shown here by the semi-sphere in the top, being repulsed by the charge in the dielectric (black circle in the middle). The lower half is a layer of dielectric material on top of a conductor (not visible). Numbers are coordinates in nanometer. 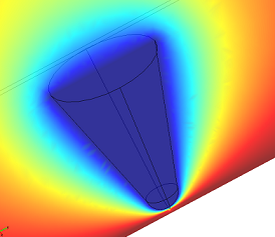