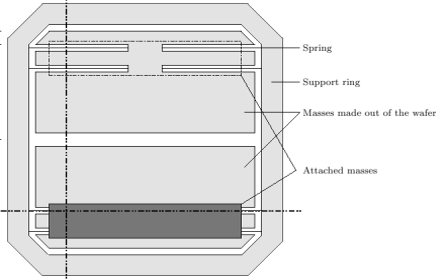 We develop sensitive low frequency accelerometer-like devices. Currently the focus is to design a device which can measure the gradient in the gravitational acceleration. This gives high sensitivity requirements: it should measure with a sensitivity of 1E/√Hz (= 10-9/s2/√Hz) or better. Besides the challenge of reaching a high sensitivity, there's also the context into which this device is to placed. It should be operated from inside a satellite in deep space. This means that there is only limited space, weight and power to work with. Otheris applications are in the field natural resource exploration.

In collaboration with Christophe Sotin from the University of Nantes we completed a project for the European Space Agency in which we described the usage of various types of gravity gradient sensors in future planetary missions. A MEMS-based gravity gradiometer already has been mentioned as a candidate for missions to the Moon, Mars, Europa, and Titan. There it should be able to measure the gravity fields of these planets and moons very accurately, it can be used to better describe these objects. At this moment despite strong indication it is not clear if there is an ocean on Europa. Since Europa is orbiting Jupiter eccentrically, there would be a tide in the possible ocean. With a gravity gradiometer it should be possible to see the temporal influences of this tide on the gravity signal, and hence derive if there is an ocean. With enough sensitivity, it would also be possible to derive how deep this ocean would be.

We do not only see applications for these type of device on cosmic missions, also down on Earth this type of device can be very useful. It provides a promising way to do dead reckoning where GPS is not available, for example in tunnels and tubes. This is because a full tensor variant would be able to measure linear and rotational motion directly, independent of the earth gravity. Also the ability to measure gravity fields will be very useful in exploration. Within the MicroNed programma we are looking for opportunities to apply this sensor in other applications besides space. 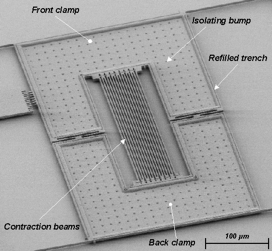 We have chosen to design a device in MEMS-technology. We are using the excellent facilities of MESA+. There we have the advantage of being able to realize a design with sub-micrometer accuracy, and have the possibility to integrate a part of the electronics. In close collaboration of the TST-group we have made a manufacturing process based on DRIE etching which should produce the high aspect ratio needed between spring height and width.

Because an accelerometer is mass-spring-system which responds to an acceleration by a movement, this movement needs to be detected, in our case by capacitive means. Combdrives will be used to create the capacitances. The design of the electronics used for measuring and control is done in collaboration with SRON using their ASIC technology. Alternatively optical readout techniques can be used as well. Currently we are using a optical readout to test the mechanics,