Researchers of the MESA+ Institute for Nanotechnology of the University of Twente have discovered an unusual magnetic effect in nanolayers of an oxide of lanthanum and manganese (LaMnO3).

Joint work with colleagues from Singapore, the United States and Ireland revealed an abrupt magnetic transition brought about by the slightest change in thickness of the layer. Science magazine publishes the research findings this week.

Materials with exceptional electronic and magnetic properties are of great importance for many applications. A particularly versatile class of materials are the ‘perovskite oxides’. The University of Twente is leading in the research on these materials.

In the reported study, the researchers have discovered a special effect relating to the magnetism of one of such perovskite-oxides; lanthanum-manganese-oxide. This material consists of stackings of LaMnO3 unit cells, quite comparable to stacking blocks of LEGO. In this case, the individual building blocks are only 0.4 nanometer in size though (1 nanometer is 1 millionths of a millimeter).

The new discovery is that the magnetism in these layers is switched on abruptly when the number of LaMnO3 building blocks changes from 5 to 6. For their research, the scientists grew thin films of the oxide on a perfectly flat crystal of nonmagnetic SrTiO3, using a technique called pulsed laser deposition. By adding a sixth layer of LaMnO3, the material switches from antiferromagnetic (antiferromagnets produce no magnetic field) to ferromagnetic. Such an abrupt transition has never been seen before. Using a Scanning SQUID Microscope, an instrument that uses superconducting electronics to measure magnetic fields with exquisite sensitivity, a direct image of the change in magnetic properties was obtained.

In their article, the researchers give an explanation for the abrupt switch from antiferromagnetism to ferromagnetism, based on an avalanche of electronic charge inside the LaMnO3 thin film from the top surface of the film to the bottom.

The discovery of such a sharp critical thickness for the appearance of ferromagnetism makes it possible to define magnetic structures on a nanoscale and implies that a very sensitive new functionality is present, in which a slight alteration or addition can alter the magnetic properties of the structure. The researchers expect this to be not only limited to adding new layers, but possibly also to other manipulations such as applying electric fields or adsorbing specific molecules. Further study will be conducted, aimed at the use of the effect in information technology and sensors.

At the University of Twente, the research was conducted by the Interfaces and Correlated Electron Systems (ICE) group, led by Prof. Hans Hilgenkamp. University of Twente postdoc Xiao Renshaw Wang had a central role in the study. The research has been done in close cooperation with the group of Prof. Venkatesan and former Twente PhD Prof. Ariando at the National University of Singapore, with further contributions from Stanford University, the University of Nebraska and Trinity College Dublin. NWO, the Netherlands Organization for Applied Scientific Research and the FOM Foundation for Fundamental Research on Matter supported the study.

Image of the magnetic fields recorded by scanning a tiny superconducting coil over the surface of a LaMnO3 film grown on a substrate crystal. The magnetic left-hand side is seven LaMnO3 blocks thick (about 3 nm), while the nonmagnetic right-hand side is only five (2 nm). The measuring setup is shown on the right. 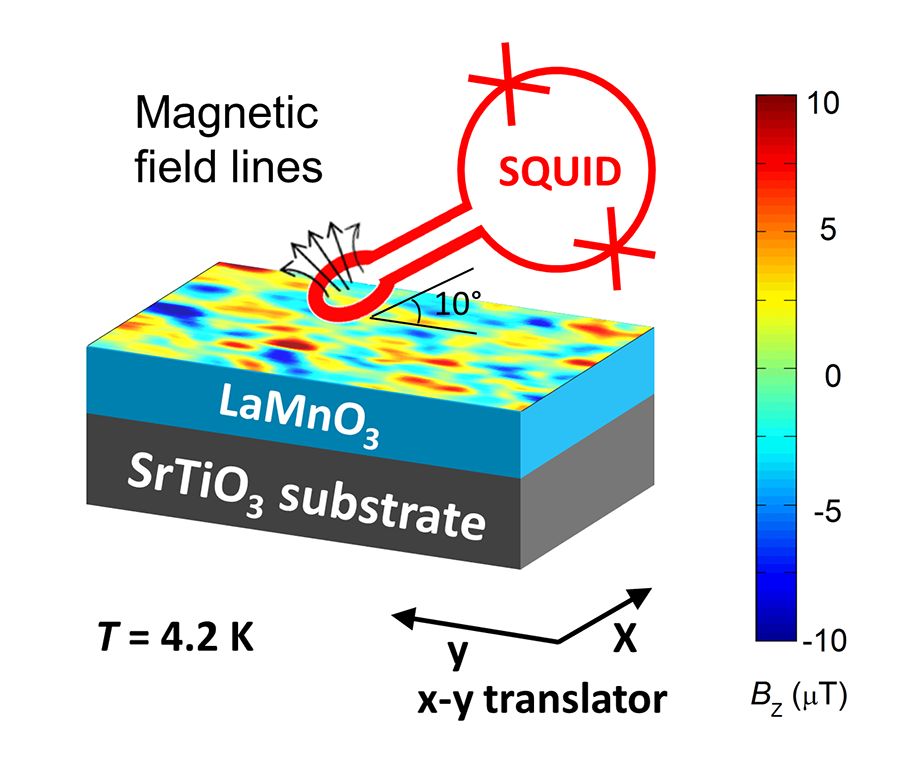 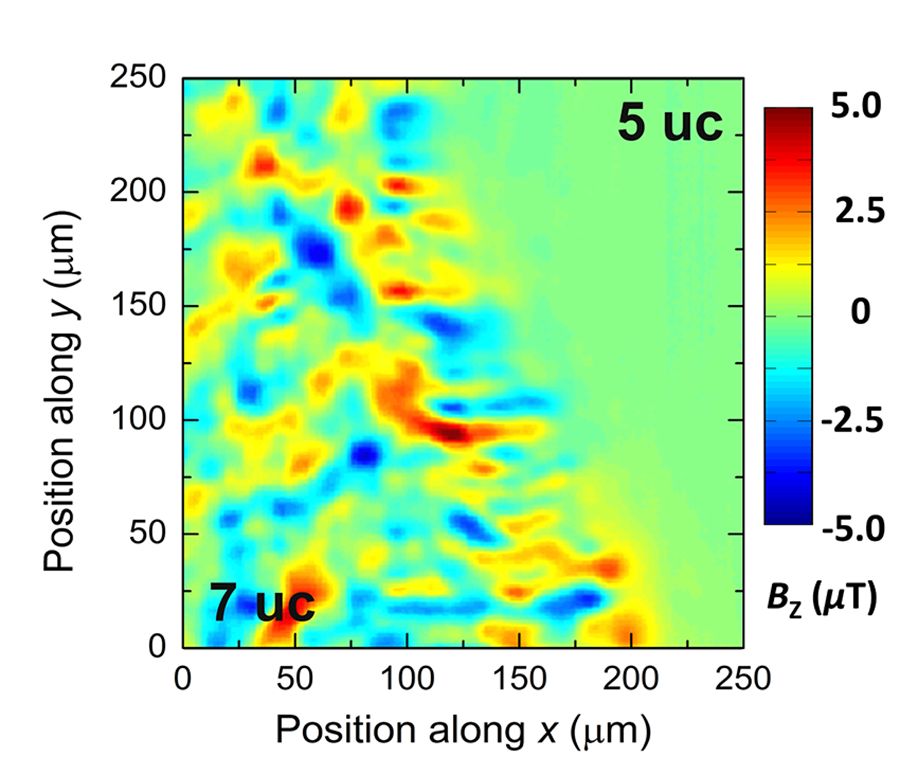 Image of the magnetic fields recorded by scanning a tiny superconducting coil over the surface of a LaMnO3 film grown on a substrate crystal. The magnetic left-hand side is seven LaMnO3 blocks thick (about 3 nm), while the nonmagnetic right-hand side is only five (2 nm). The measuring setup is shown on the right.