Due to the COVID-19 crisis measures the PhD defence of Pieter Berghout will take place online.

Pieter Berghout is a PhD student in the research group Physics of Fluids. His supervisor is prof.dr. D. Lohse from the Faculty of Science and Technology. 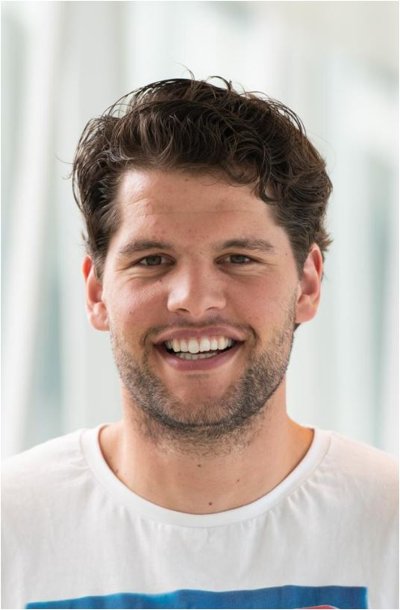 In this thesis we have studied the effects of streamwise curvature on a rough and smooth wall-bounded turbulent flow. To this end, we have studied a canonical system of fluid mechanics, Taylor–Couette (TC) flow. TC flow is the flow in between two independently rotating, concentric, cylinders. In chapter 1, we studied direct numerical simulations (DNSs) of TC turbulence with sand grain roughness mounted on the inner cylinder. We focus on the effects of the roughness height ks in the transitionally rough regime. We find that the downwards shift of the logarithmic layer, due to transitionally rough sand grains exhibits remarkably similar behavior to that of the Nikuradse (VDI-Forschungsheft 361, 1933) data of sand grain roughness in pipe flow, regardless of the Taylor number dependent constants of the logarithmic layer. Furthermore, we find that the dynamical effects of the sand grains are contained to the roughness sublayer h with h = 2.78ks .

In recent years, high-fidelity simulations and experiments revealed the shape of the streamwise and angular velocity profiles in turbulent TC flow up to very high Reynolds numbers. However, due to curvature effects, so far no theory has been able to correctly describe the turbulent streamwise velocity profile for given radius ratio, as the classical Prandtl–von Kármán logarithmic law for turbulent boundary layers over a flat surface at most fits in a limited spatial region. In chapter 2 we address this deficiency by applying the idea of a Monin–Obukhov curvature length to turbulent TC flow. This length separates the flow regions where the production of turbulent kinetic energy is governed by pure shear from that where it acts in combination with the curvature of the streamlines. We demonstrate that for all Reynolds numbers and radius ratios, the mean streamwise and angular velocity profiles collapse according to this separation. We then develop the functional form of the velocity profile.

Finally, using the newly developed angular velocity profiles, we show that these lead to an alternative constant in the model proposed by Cheng et al. (2020) for the dependence of the torque on the Reynolds number, or, in other words, of the  generalized Nusselt number (i.e., the dimensionless angular velocity transport) on the Taylor number.

Mapping any given roughness geometry to its fluid dynamic behaviour has been hampered by the lack of accurate and direct measurements of skin-friction drag. Here the TC system provides an opportunity as it is a closed system and allows to directly and reliably measure the skin-friction. However, the wall-curvature potentially complicates the connection between the wall friction and the wall roughness characteristics. In chapter 3 we investigate the effects of a hydrodynamically fully rough surface on highly turbulent, inner cylinder rotating, TC flow. We find that the effects of a hydrodynamically fully rough surface on TC turbulence, where the roughness height k is three orders of magnitude smaller than the Obukhov curvature length L c [97], are similar to those effects of a fully rough surface on a flat plate turbulent boundary layer (BL). Hence, the value of the equivalent sand grain height  ks, that characterizes the drag properties of a rough surface, is similar to those found for comparable sandpaper surfaces in a flat plate BL. Next, we obtain the dependence of the torque (skin-friction drag) on the Reynolds number for given wall roughness, and find agreement with the experimental results within 5%.

Our findings demonstrate that global torque measurements in the TC facility are well suited to reliably deduce wall drag properties for any rough surface. Chapter 4 deals with ‘unusual’ roughness. Unusual, non-homogeneous, roughness means in this context that the roughness contains a characteristic length scale that is not smaller than the gap width, but is of the same order. This leads to the invalidation of a classic modelling assumptions (outer layer similarity), and consequently adds majorly to the complexity of the problem.

In chapter 5 we shift the focus again to Taylor–Couette flow with smooth walls, and study the emergence and dynamics of very large structures at the onset of turbulence (or better, the onset of laminarization). These structures, already observed by D. Coles (1965), manifest themselves as large turbulent spirals that slowly disappear when the cylinders rotate slower and slower. Prigent et al. (2000) found that the formation of these spirals fits the phenomenology of the Complex Ginzburg–Landau model and this suggests that they are a finite wavelength instability. In our simulations, we show that this description holds when curvature effects do play a role. Finally, we study Rayleigh–Bénard flow, the flow between a heated and cooled plate, in chapter 6. In particular we focus on the frequency and amplitude modulation of small-scale turbulence by the large-scale convection role.

Due to the COVID-19 crisis measures the PhD defence of Pieter Berghout will take place online.