Due to the COVID-19 crisis measures the PhD defence of Myrthe Bruning will take place online.

Myrthe Bruning is a PhD student in the research group Physics of Fluids. Her supervisor is prof.dr. D. Lohse from the Faculty of Science and Technology. 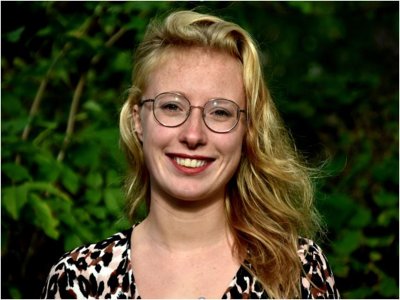 The evaporation of confined and colloidal droplets has been examined in different configurations and systems. The confinement is achieved by fully immersing the droplet in an elastic medium. When the droplet evaporates, it also deforms the surrounding elastic gel. As the droplet decreases in size during evaporation, the tension in the gel increases. Therefore the gel tries to release its tension by folding onto itself, the so-called creasing instability. However, as the droplet keeps shrinking, the pressure inside the liquid keeps decreasing until cavitation occurs inside the droplet. A bubble nucleates and grows up to nearly the same size as the initial droplet. We investigated the evaporation and cavitation dynamics in large detail for pure water drops. The frequency of the oscillating cavitation bubble could be related to the visco-elastic properties of the surrounding elastic medium. Insights in this conversion of enthalpy (evaporation) into mechanical energy (sudden release of the build up elastic tension), could open new ways of designing motile synthetic materials.

When in such a confined system, colloidal droplets are evaporated instead of pure water droplets, the creasing instability can be fully suppressed. We show that in the presence of particles, cavitation events occur often before any creasing develops. The chances for an early cavitation event to occur increase with particle concentration. The length scale of the particle is of great influence for this early onset of cavitation. When salt is added to such a colloidal droplet, particles tend to cluster and thereby cavitation occurs even earlier, proving that an increased the length scale of the particle is important for this phenomenon to occur. This system of introducing a colloidal droplet into an elastic medium serves as a simple and reliable method to measure the tensile strength of particle solutions.

Salt cannot only be used to influence the interaction between particles, but also serves as an anti-surfactant as it increases the surface tension of water. When a (pinned) salty sessile droplet evaporates, the salt content near the contact line increases. As a result a Marangoni flow arises which is directed from the apex of the droplet towards the contact line. When particles are added to such a system, their assembly during evaporation is completely different as compared to a colloidal droplet without any salt. In the latter case, particles arrive at the contact line via the bulk of the droplet and form a three dimensional packing near the contact line. In the case of a salty droplet, particles follow the surface flow and arrive at the contact line via the droplet's interface. We show that, as a result, particles arrange themselves into a monolayer at the liquid-air interface. Confocal microscopy allows us to observe the particle-per-particle formation and structure of this monolayer. By changing the salt concentration inside the droplet, we can alter the structure of the monolayer. Low initial salt concentrations (5 and 10 mM NaCl), result in well-ordered and highly packed particle arrays. For higher salt concentrations (50 mM), loosely packed and heterogeneous particle monolayers are observed. The formation of this monolayer also alters the final particle deposit. High salt concentrations and large particle numbers lead to monolayers which easily cover the whole droplet surface. After the droplet has completely evaporated, this leads to an homogeneously distributed final particle deposition.

Finally, not only the addition of salt introduces surface flows, also the presence of surfactants can induces these Marangoni flows. We show that if two sessile surfactant droplets meet, they do not immediately coalesce. Instead, they remain in a temporary state of non-coalescence.  The coalescence behaviour can be classified into three regimes that occur for different surface tension differences and initial contact angle of the droplets. However, the surface tensions difference is not the determining factor alone, also the actual surfactant concentration matters. This reveals that the merging process is not solely governed by hydrodynamics and geometry, but also depends on the molecular physics of surface adsorption.

Due to the COVID-19 crisis measures the PhD defence of Myrthe Bruning will take place online.